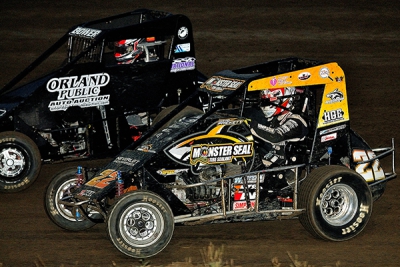 Adobe kicks off a 31-race campaign across six different dirt tracks on the West Coast. The first three rounds of competition feature the 1/5th mile north of Phoenix. A mix of new and returning drivers will challenge for the first win of the year.

Bower has a win and a fifth place finish his two career starts at the speedway. Prickett aims for a redemption run with new teammate Cody Key also competing. Fresno’s Key is a 24-year-old multi-time Micro Sprint feature winner making his Midget debut. The 2022 third place driver in the championship was Cory Brown of Peoria, Ariz. Brown is one of two Copper State drivers with WMR wins at Adobe Mountain along with Nathan High of Goodyear, Ariz. Chloe High debuted in the season finale and is expected to compete on Saturday.

Atwater’s Cameron Beard and Santa Paula’s Megan Moorhead are on the hunt for their first series win and will be in action on Saturday. Beard had a best finish of fourth in 2021 while Moorhead used a pair of runner-up finishes to place fourth in the championship. Both Todd and Kyle Hawse of Las Vegas will launch their 2022 seasons at Adobe Mountain. Kyle Hawse ran sixth in the series championship with a best finish of second in October at Adobe.

17-year-old Dale Eliason, Jr. is the latest driver from Phoenix to join the series. He will drive the No.74 normally driven by Greg Jewett. Eliason won the 2018 Power 600 Micro championship in Arizona.

Western Midget Racing will be joined by winged NOW600 Cactus Region Micro Sprints, Mini Late Models, and Jr. Sprints in Saturday’s season opener. General admission tickets are $10 for ages 14 and up, while ages 6-13 are $5 and kids five and under are FREE.

Friday pit gates open at 4pm with open practice from 6-9pm. Pit passes are $20 per person and general admission is free.

Saturday pit gates open at 2pm. Drivers meeting is at 4pm with wheel pack and racing to follow. Pit passes are $35. A reminder that Adobe Mountain Speedway is a cash-only facility.