From Next Year the New 18-Inch Pirelli Tyres Make Their Debut in Formula 1. In Abu Dhabi, the Last Race for 13-Inch Tyres 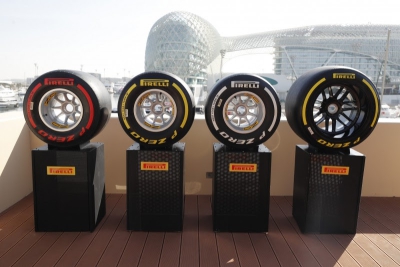 The Abu Dhabi Grand Prix at Yas Marina this weekend will be the last race in Formula 1 history run on 13-inch tyres with a technological revolution coming from next year after more than half a century, in which Pirelli will play a key role with its new 18-inch tyres. To celebrate the changing of the guard, all the 13-inch slick tyres used in Abu Dhabi will carry a special logo on the sidewall: "Next year I turn 18" – underlining the switch to 18 inches by bidding farewell to the current tyres before welcoming the new size next year.

Pirelli first ran an 18-inch tyre on a Formula 1 car back in 2014, at a test at Silverstone with Lotus reserve driver Charles Pic. Initially, Formula 1 planned to adopt 18-inch tyres from 2021 as part of a package of new technical regulations but this was pushed back to 2022 as a result of the COVID-19 pandemic. In the meantime, Pirelli successfully ran 18-inch tyres in Formula 2 since the 2020 season and completed 36 days of 18-inch testing with Formula 1 cars that were modified to accommodate the new size.

Tyres in 13-inch size have raced for nearly the entire history of the championship to date, from the 1960s. Nonetheless, at the time – and into the subsequent decade – there was still a lot of regulatory freedom around wheel size. In the 1980s, 13 inches finally became the definitive size. Pirelli first ran a 13-inch tyre in Formula 1 at the 1981 San Marino Grand Prix with the Toleman team consisting of Brian Henton and Derek Warwick. Then, in the same season and subsequent ones, other teams adopted the Italian rubber for their cars.

The first win for Pirelli’s 13-inch tyres came at the 1985 French Grand Prix courtesy of Nelson Piquet with Brabham-BMW. Pirelli was then back with a new generation of 13-inch tyres from 1989 (two years after the P Zero name was born) until 1991, before the current return from 2011 as Global Tyre Partner: when Sebastian Vettel claimed the first championship for a Pirelli 13-inch tyre with Red Bull.

Since Pirelli returned to the world championship as sole supplier, more than 400,000 13-inch tyres have been produced from the factories at Izmit in Turkey and Slatina in Romania.

"This weekend will mark a pivotal moment in Formula 1 history with the definitive farewell to the 13-inch tyres that have been part of the pinnacle of the sport for decades. Pirelli has played a starring role in that era, just as it has done since the inaugural championship back in 1950. We're proud of everything that has been achieved over the years. At Pirelli, we've always focussed on innovation to be a valued partner to the championship. We saw this back in 2011, when we accepted the first technical challenge that was put to us to create high-degradation tyres. Then again when we created the tyres for the very first hybrid F1 cars in 2014, and once more when we made the move to much wider F1 tyres – for the fastest generation of cars seen in the sport – from 2017. Now, thanks to the biggest rule change in decades, we take on this latest revolution with brand new tyres that are more similar to those used on the road by everyday motorists. This means that we have the best chance to transfer the technology derived from Formula 1 into our road car product. It's time to say thanks to 13-inch tyres for all the emotions they have given us, as we look forward to a new era with the 18-inch tyres."