Dyson Muscled His Way to First TA Title in 2021 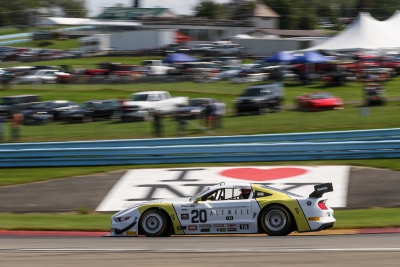 Perseverance paid off for Chris Dyson in 2021. After coming close for the last three years, Dyson brought home the Trans Am Series presented by Pirelli TA championship following an outstanding season.

The Poughkeepsie, New York, driver won seven of the opening 10 races in the No. 20 ALTWELL CBD Ford Mustang, clinching the title with one race remaining. While Dyson missed the season finale at Circuit of The Americas to concentrate on family matters, late substitute Matthew Brabham took a dramatic last-second triumph to give the team its eighth victory. (VIDEO: Chris Dyson 2021 Season Highlight)

“Winning the championship was massive for me, personally, on a few levels,” Dyson said. “Trans Am has been one of the lynchpins of America road racing for decades, and to be alongside some of the great champions – many of whom I saw racing as a kid – it’s hard to put in to words how meaningful it is, being considered a Trans Am champion.”

Dyson raced in Trans Am for the first time in 2017, finishing 12th in Reed Kryder’s Cadillac CTSV, filling in for David Pintaric in a race won by fellow New Yorker Andy Lally.

Dyson fanned the full schedule in 2018, winning at Michelin Raceway Road Atlanta among five podium finishes in finishing third in the championship behind Ernie Francis Jr. and Lawrence Loshak. Coming from top-level LMP1 and LMP2 (675) Prototype sports cars in ALMS, SRP and Daytona Prototype in Grand-Am, Dyson enjoyed the transition to the Trans Am race cars. 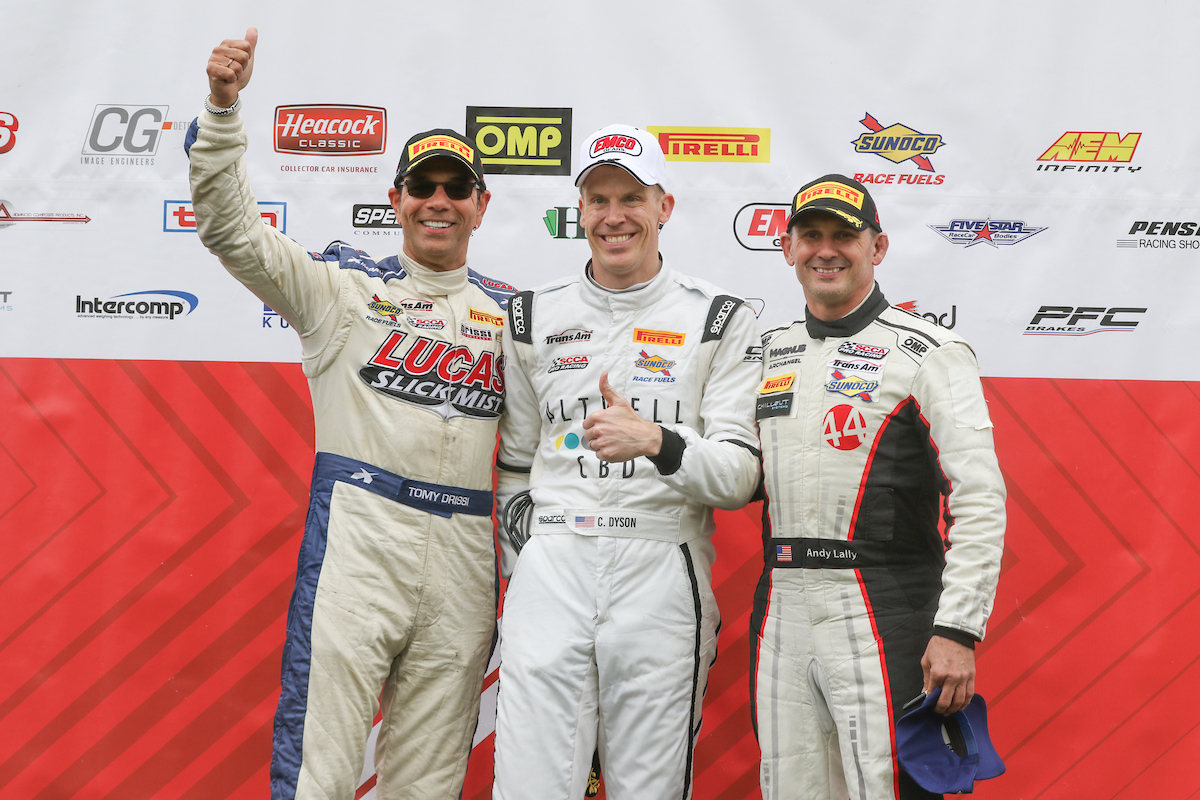 “In all the forms of racing I’ve been able to compete in, I raced in cars at the top of the tree for their respective style of racing,” Dyson explained. “I think when it comes to GT-level racing, the Trans Am cars are hands-down the most monstrous cars you could possibly be racing. The actual driving is so rewarding in the Trans Am cars because there are no driver aids. The cars demand a lot of you as a driver, and reward precision and aggression. There’s a nuance between the two that’s endlessly fascinating and challenging.”

The 2019 campaign saw him win races at Indianapolis, Lime Rock and Daytona among seven podiums, capture his first career TA pole at Lime Rock, and place second in the final standings, only 15 points behind Ernie Francis Jr. The pandemic-jumbled 2020 season saw him take third behind Francis Jr. and Tomy Drissi, while winning at Road America and the season finale at Road Atlanta.

His 2021 season started off on an ominous note, when Dyson spun during qualifying, changed tires and had to start 12th at the back of the TA grid for the opening race at Sebring. Gunning for an eighth-consecutive Trans Am crown, Francis Jr, won the pole in track-record speed and led virtually all the way before being passed by Dyson, who won the race on the final lap. 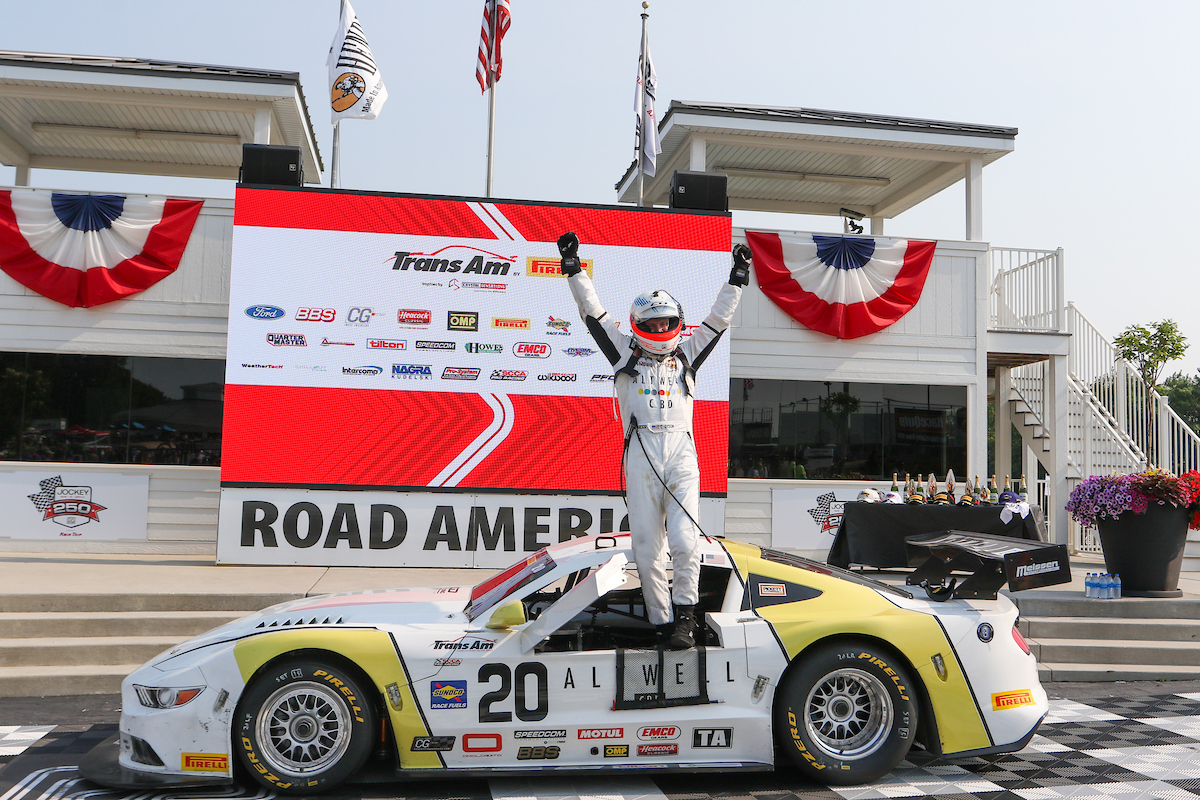 After taking fifth at Road Atlanta and Laguna Seca, Dyson added victories at Lime Rock, Mid-Ohio and Road America, placed third at Brainerd, and ended his season by sweeping the Watkins Glen doubleheader and clinching the title with a victory at VIR.

“There were so many highlights and some very memorable races,” Dyson said when asked about his personal highlights of the championship campaign. “Obviously, winning the opening race at Sebring from the last starting position on the last lap against a guy like Ernie France Jr. – who’s one of the best-ever Trans Am racers – was really satisfying and a great way to start the season.

“Also, winning at home – we swept our home races. Winning at Lime Rock in the rain was very rewarding, and going up to Watkins Glen and taking both ends of a doubleheader. To win at the two tracks I’ve considered home my whole career was tremendous, and those results put us in a great position to close the championship at VIR.

Unfortunately, family matters took priority for the season finale in Austin, but CD Racing again was up to the challenge. Brabham filled in at the 11th hour and beat Francis Jr. on a last-lap sprint to the checkered flag after chasing the South Floridian for the entire race. He is the son of Geoff Brabham, who raced against Chris’ father Rob Dyson in the glory days of the IMSA Camel GTP. (VIDEO: Chris Dyson Honors Gala Championship Acceptance Speech) 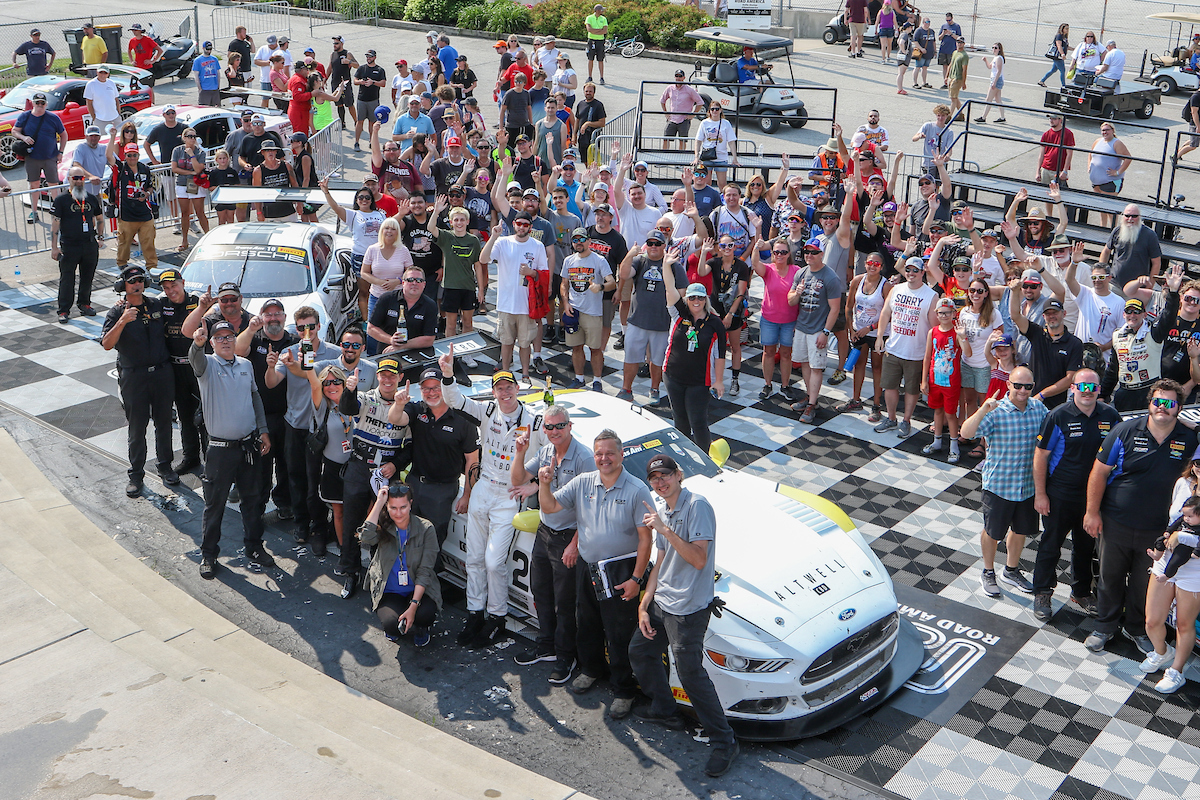 “I think Matthew did a terrific job,” Dyson said. “What can you say? He came in on short notice, having never driven the car before he sat in it on Friday, and by the end of the weekend he was a race winner. It was unfortunate that I had to miss the event, but Matthew stepped up, performed beautifully and in a lot of ways was an extension of a relationship between the Dyson and Brabham families that goes back decades. I was really proud of Matthew, he’s unquestionably a star of the future and has a really bright career ahead of him. It was a tremendous result for the team, and it underlines how strong our package has become and how good the team is, that we can win without me driving.”

For 2022, expect to see Dyson back in action in Trans Am.

“Right now, our priority is to come back and defend our Trans Am championship, and hopefully build on what we’ve done so far,” he said. “I know the competition is not going to rest easy, and we’re already eagerly preparing for 2022.”

The Trans Am Series presented by Pirelli is one of the longest-running championships in motorsport, and will celebrate its 55th season with a diverse 12-race 2022 schedule that will include multiple road courses, a roval and a street circuit.

Trans Am’s 2022 roster of races will be staged at legendary venues across the United States as part of SpeedTour, IndyCar Series and NASCAR events with the season kicking off at Sebring International Raceway February 24-27.

Special offer from ALTWELL CBD:
To celebrate the successful partnership between Chris Dyson and Greg Pickett, ALTWELL CBD has extended a special 30% discount off all orders. Visit Altwell.com and enter the code DYSON30.

This code is good for one time use only and does not expire.

Rate this item
(0 votes)
Tweet
« The Next Chapter: Long Looks Ahead, Not Back Is Formula E on Its Way to Overtake Formula One? »