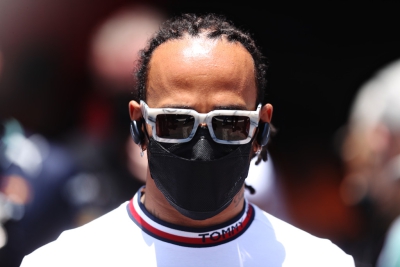 One year after the women-led organization CODEPINK began their appeal to the Formula One race car driver, Lewis Hamilton spoke out ahead of the calling for Saudi Arabia and Qatar to be scrutinized for human rights records.

"As sports go to these places, they are duty-bound to raise awareness for these issues," said Hamilton. "These places need scrutiny. Equal rights is a serious issue." Hamilton is scheduled to compete in the F1 race in Saudi Arabia on December 5, 2021.

CODEPINK circulated a petition that gathered almost 6,000 signatures asking Hamilton to either boycott the December 5 F1 race in Saudi Arabia or to use his time there to speak out for human rights in the country and an end to the war in Yemen. A coalition letter of 45 human rights, faith-based, and foreign policy organizations organized by CODEPINK made the same request.

"Clearly, Hamilton has a deep concern for human suffering and is willing to take action," said CODEPINK Yemen campaigner Danaka Katovich. "Saudi Arabia is waging a brutal war on Yemen that is starving almost twenty million people in the worst humanitarian crisis on the planet. Hamilton is in a position to help end the war in Yemen and the human rights abuses Crown Prince Mohammed bin Salman is committing against Saudi women, dissidents, and others by calling attention to the issue. I am glad Hamilton has begun taking action, and I hope he continues as he travels to race in the country."

CODEPINK and allies such as the Yemen Relief and Reconstruction Foundation, Freedom Forward, Democracy for the Middle East Now (DAWN), Just Foreign Policy, and Avaaz will continue to reach out to Hamilton, asking him to raise the following issues while he is in Saudi Arabia: women's rights; labor rights; prisoners of conscience, the war in Yemen; and democracy.

CODEPINK is now appealing to pop star Justin Bieber to cancel his performance at the race.