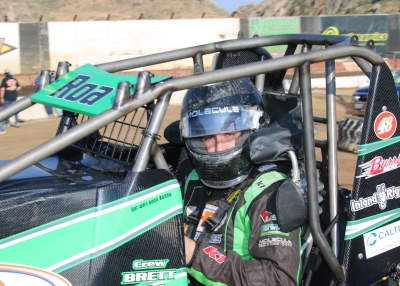 Brody Roa scored his third win in five starts in Jason May’s #8M when he bested the open comp Sprint Car field at the Kern County Raceway Park on November 15th. The race was a shakedown for May’s new car that Roa will be driving when Agajanian Promotions presents the “80th Annual Turkey Night Grand Prix'' this Friday and Saturday at the Ventura Raceway.

Roa, who lives in Garden Grove, California, and May first joined forces on Labor Day Weekend in 2020. The pairing clicked right away and won the historic first ever Central Arizona Sprint Car Series main event at the Central Arizona Speedway. This year, the likeable 30-year-old driver and May have continued their successful partnership. In five races together in 2021, they have three wins, one third place finish and a fifth.

Last week’s victory at the beautiful Kern County oval came just two days after Roa finished the 2021 season with the USAC/CRA Sprint Cars in the “54th Annual Western World Championship” at the Arizona Speedway. In that event, Roa competed against not only the top stars in the USAC/CRA Series, but also the best from the USAC National Series. Driving the handsome bright green and black BR Performance #91R at the track that is south of Phoenix, he toured the 3/8-mile oval in 15.269 in Friday’s qualifying. That was good for seventh fastest in his 19-car flight and 16th fastest of the 38 cars on hand.

Roa followed up his night one qualifying effort with a fourth-place finish in his heat race. That placed him on the outside of row eight, in the 16th spot for the 30-lap main event. Known as “The Pride of Garden Grove,” he methodically worked his way through the traffic passing seven cars in the main event to finish ninth.

Twenty-four hours later Roa was back in action and this time he turned a lap of 14.888 in qualifying. That was eighth fastest of the 19 cars in his flight and ninth quickest of the 39 on hand.

Things were looking good in his heat race when Roa went to the top to move from fourth to fifth. He was using the same wide line and was about to take third when the cushion bit him in turn two. The #91R bicycled and then hurtled into the catch fence before flipping down the track. Roa was uninjured in the crash, but his car was damaged, and he had to go to the B main.

The Zac Bozonich led crew thrashed to get the car ready for the B and Roa was in his fourth place starting spot when the green flag waved. A wrench was thrown into the works early on when he got clobbered by another car and dropped back to ninth. That was three spots out of a transfer position. However, the wily veteran did not panic and slowly but surely worked his way forward. When the checkered signaled the end to the 12 lapper, Roa had clawed his way back to fourth.

For the second time in a row, Roa was coming from 16th at the start of the main and once again, he rolled forward. This time he advanced four spots to finish 12th. As he passed more cars than any other USAC/CRA regular driver in the main, he collected the valuable “Ellen Ellis Hard Charger Award.”

This Friday and Saturday’s “Turkey Night Grand Prix” races at the track located adjacent to the beach in Ventura, will be a special event non-point program for the USAC West Coast 360 Sprint Cars. Friday’s program will include a $1,200.00 to win 10 car dash for the sprint cars and practice for the NOS Energy Drink USAC National Midgets. On Saturday night, the sprint cars will run a semi and a $3,000.00 to win A main. The companion midgets will run their entire show beginning with qualifying and culminating with a 98-lap main event on Saturday.

Roa, the 2017 USAC West Coast Series champion, has made one appearance at Ventura in 2021. That was on June 26th when he was driving for May in the West Coast Series. That night he qualified fourth fastest, placed second in his heat race and ended up fifth in the 30-lap main.

Spectator gates at Ventura will open at 3:00 p.m. Hot laps will begin at 3:15 with racing at 5:30. The track is located a nine-iron away from the breaking waves of the Pacific Ocean on the Ventura County Fairgrounds at 10 W. Harbor Boulevard (93001). The website is http://venturaraceway.com/ and the office phone number is (805) 648-RACE.

While the season ends on Saturday, Brody Roa merchandise will still be available online and will make great Christmas gifts for his fans. You can see it all in his online store that is packed with great items including t-shirts, sweatshirts, caps, beanies, baby onesies, plush blankets, jigsaw puzzles, stickers, notebooks, tote bags, wine tumblers, mugs, bandana pet collars and more. To check it out, please visit the following website https://www.brodyroa.com/shop/.

If you or your company would like to jump on board and receive recognition throughout the year, please give the two-time USAC champion racer a phone call or drop him a note at the contact information at the top of this release. You can also contact him if you would like to put him in your car in a USAC National Series race when his west coast schedule permits.