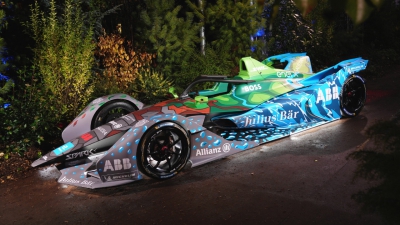 The Department for International Trade (DIT) has launched a Clean Growth programme at the COP26 United Nations Climate Change Conference alongside Formula E.
The Clean Growth programme was formally launched during a joint DIT and Formula E reception tonight (Thursday) attended by more than 150 representatives from international governments, Formula E teams and partners, industry figures and development agencies.
Headquartered in London, the ABB FIA Formula E World Championship showcases the latest in e-mobility in Europe, North America, Asia and LATAM with races in iconic city centres including London, Berlin, Rome, Vancouver, Jakarta, Seoul and Mexico City.
Cars exported around the world today go further on every charge due to increases in energy efficiency, enhancements in battery range and advances in powertrain development achieved through Formula E.
UK-based Formula E teams include Jaguar Racing, Mercedes-EQ, Mahindra Racing, NIO 333 Racing and Envision Racing, bringing investment alongside exporting new innovations. Formula E’s network of partners includes ABB, a world leader in electric vehicle infrastructure, who push the boundaries of technology to drive sustainable progress to new levels in more than 100 countries around the world.  At the DIT and Formula E event, official beer and cider partner, Heineken®, provided new low-carbon bottles made with 95% recycled glass and with low carbon biofuels instead of high carbon natural gas.
The ABB FIA Formula E World Championship has played a leadership role for elite sport at COP26, headlined by a live CHANGE. ACCELERATED. event; signing the UNFCCC Sports for Climate Action Framework; and appearing on a series of panels led by the United Nations and title sponsor, ABB.
Ahead of the opening race of Season 8 in January, Envision Racing launched their new livery and Lei Zhang, CEO of Envision Group, unveiled a scale replica Formula E race car made from single use plastic waste in a collaboration with Kids Against Plastic, COP26 and Glasgow City Council.
Formula E is the first sport in the world to be certified net zero carbon since inception and is also the first sport to adhere to science based targets by committing to reduce CO2 emissions by 45% by 2030 based on 2019 emissions.
Jamie Reigle, Formula E CEO, said: “The Department for International Trade’s Clean Growth programme will help boost clean growth exports and drive-up green investment across the UK, enabling the proliferation of green technology. Formula E supports this action and is honoured to showcase the future technologies that we will see in cities around the world, many of which are being developed here in the UK. Our role as the ABB FIA Formula E World Championship has never been more relevant or critical. We will continue to use our global platform to demonstrate the benefits of adopting cleaner forms of transport to tackle air pollution and climate change in the world’s cities.”
Anne-Marie Trevelyan, International Trade Secretary, said: “Formula E showcases the strength of UK clean growth innovation, investment and exports. Our new Clean Growth programme will further promote UK clean growth exports and technology overseas and bolster green investment, whilst speeding up the global transition to a low-carbon economy.”
Rate this item
(0 votes)
Tweet
« Tincknell Puts Mazda atop Practice Chart in Motul Petit Le Mans Practice Tony Stewart Racing Names Crew Chiefs for NHRA Program »