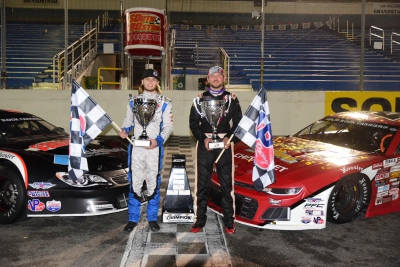 Both champions were the exact same drivers who won their select races.

Carson Kvapil dominated the 125 Super Late Model portion of the event to steal the 2021 championship from Matt Craig.

Bobby McCarty did the same taking the lead on lap two and never looked back. McCarty’s third win of the 2021 season was enough to be crowned a three-time CARS Late Model Stock Car Tour champion.

Matt Craig was the favorite coming into the season finale at South Boston to score a third consecutive CARS Super Late Model Tour championship, but it was Carson Kvapil who shocked everyone with a perfect race to win the 2021 championship.

Kvapil entered South Boston down 8 points to Craig. The Mooresville, North Carolina driver needed everything to go right to win the championship. That’s exactly what happened.

Kvapil scored the pole, led the most laps, and won the race to earn the maximum amount of points. With those results Kvapil also gained the season ending bonus point for most poles (1 point) and most wins (2 wins) for the 2021 season.

Craig’s third place finish and never having a shot at the top position to lead a lap ended the night with Craig down by a single point to Kvapil.

Ryan Moore finished between Kvapil and Craig in the second position. Kodie Conner finished fourth and Justin Crider rounded out the top five in the final Super Late Model event in series history.

Bobby McCarty must have watched everything that Carson Kvapil did in the Super Late Model race, because he duplicated it almost exactly during the 125 Late Model Stock Car event.

The new three-time series champion took the lead on lap two and set sail, never looking back over the rest of the field. McCarty’s dominating win was his third of the 2021 season, the most of any driver.

Rookie and championship contender Kaden Honeycutt entered the points battle one marker behind McCarty, but a less than stellar qualifying effort was too much for the Texas youngster to overcome. Honeycutt to the checkered flag in the seventh position, unofficially finishing 13 points behind McCarty.

For additional information on the CARS Late Model Stock Tour and the CARS Super Late Model Tour visit www.carsracingtour.com. Be sure to stay active and social with the tour by liking “CARS Tour” on Facebook, following @CARSTour on Twitter, and scrolling through photos on Instagram cars_tour. Additional series information can be obtained by calling the CARS Tour series office, located in Mooresville, NC, at 704.662.9212.