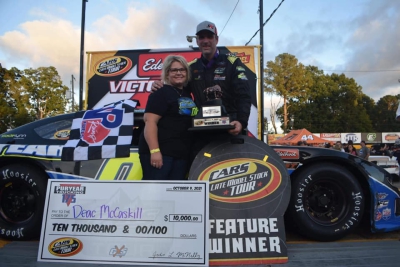 McCaskill led the most laps of the 125 lap event in route to the victory. It was an emotional victory for McCaskill who called the win “probably the biggest win of my career” in Edelbrock Victory Lane.

Layne Riggs pieced together a much needed solid second place finish, holding off a hard charging Jonathan Shafer, who came from an early race pit stop to finish third.

Championship points contenders Bobby McCarty and Kaden Honeycutt are unofficially in the same position they were in prior to Wake County. McCarty has a single point advantage heading into the season finale next weekend at South Boston Speedway. McCarty will look to finish ahead of the rookie to secure his record breaking third series championship, while Honeycutt will look to do the same to become the first rookie champion in the series.

For additional information on the CARS Late Model Stock Tour and the CARS Super Late Model Tour visit www.carsracingtour.com. Be sure to stay active and social with the tour by liking “CARS Tour” on Facebook, following @CARSTour on Twitter, and scrolling through photos on Instagram cars_tour. Additional series information can be obtained by calling the CARS Tour series office, located in Mooresville, NC, at 704.662.9212.