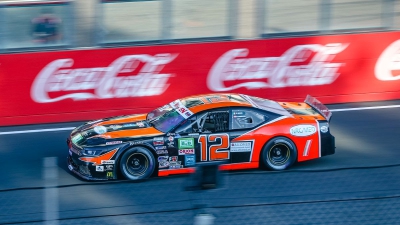 The 2021 regular season of the NASCAR Whelen Euro Series ended last weekend in Zolder, Belgium, with a roller coaster of emotions for the Solaris Motorsport drivers. In the EuroNASCAR PRO Race 1 Francesco Sini showed to the fans a great comeback, while in the second Division the young Austrian driver Alina Loebnegger will arrive at the Finals in Vallelunga aiming to close the gap for the title in the Lady Cup. Positive weekend also for Pierluigi Veronesi and his #27 Mustang technically managed by the Solaris Motorsport technicians, who brought home the Top10 in both races.

"It was a really intense season for us, with many good races and some difficult moment to face" stated Francesco Sini, able to recover more that half of the grid in Race1 after being forced to skip the qualyfing session for a technical issue. The Italian driver grabbed also a Top 10 under the checkered flag for the Race 2 at the wheel of his Camaro. "I'm quite satisfied about we achieved till now. Personally I missed the good result, we were often very competitive but not always we did not be able to concretize our potential. Instead, I'm very happy about the result in EuroNASCAR 2. Alina grew up in a very good way, quickly and constantly, while Pierluigi is one of the protagonist of the overall Top 10."

The EuroNASCAR Finals, held in Vallelunga in two weeks, will distribute double points, a variable that can change all the plans. While Francesco Sini wants to end the season with a good result on his hometrack, Alina Loebnegger will do all her best to close the gap to the lead of the Lady Cup, where the Austrian is now second. The young female driver will try also to step up on the Rookie Trophy podium.

With a very close points standings and more than 160 points on the stakes in EuroNASCAR 2, Pierluigi Veronesi can aim to dreams of glory. The driver of the Mustang #27 is now 63 points far from the lead, but only 39 to the overall podium.