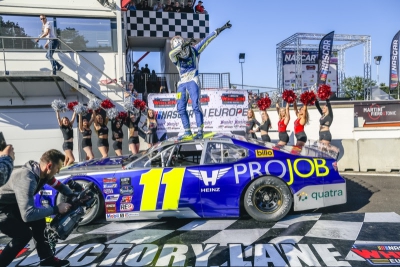 PK Carsport and Stienes Longin are back with a win: the Belgian led all 18 laps of EuroNASCAR PRO Round 9 at Circuit Zolder in Belgium. Making his NASCAR Whelen Euro Series comeback at the wheel of the #11 Chevrolet Camaro, Longin kept the lead from Pole Position at the first corner and sped to a phenomenal victory at his hometrack while drama struck behind the non-championship driver, who scored his maiden EuroNASCAR PRO win at Zolder in 2019.

“It’s amazing to be back in EuroNASCAR and to score my third NWES win here at my hometrack in Zolder is just fantastic”, said the 2016 EuroNASCAR 2 Champion. “The team did a great job and gave me a fantastic car. Of course I tasted blood for a full time comeback and let’s see what the future holds for us. It’s also great to have the fans back here at the track in Belgium, now we can all enjoy the great American Festival NASCAR together here at Zolder.”

In the opening lap, Yevgen Sokolovskiy got stuck in the gravel and Henri Tuomaala, Ian Eric Waden and Leonardo Colavita got together at the hairpin, triggering a safety car period. On the ensuing restart on lap 5, CAAL Racing drivers Alon Day and Gianmarco Ercoli made contact in turn 5 while Day was trying to overtake Longin for the lead. Day managed to finish the race in 17th and Ercoli was classified 21th. Both drivers were keen to take advantage of the absence of Loris Hezemans, who’s competing in the NASCAR Xfinity Series at the Charlotte Roval, but found themselves out of the contention for the race win at Zolder. Day posted the fastest lap and will start from pole in Sunday’s race.

Speedhouse’s Lucas Lasserre kept himself out of trouble and finished a strong second. The 43-year-old NWES veteran, who’s acting as the team boss, engineer and driver of his team, settled behind Longin to score his first podium finish of the 2021 NWES season. Being back at CAAL Racing, Marc Goossens was third under the checkered flag at his hometrack with a last lap pass on Vittorio Ghirelli at the Jacky Ickx Chicane.

A title contender scoring important points in the championship battle was Vittorio Ghirelli. The Hendriks Motorsport driver ended up fourth after the tremendous battle against Goossens. Coming from Fasano in Italy, the 27-year-old tried everything to collect the last spot on the podium but he came just short.

While DF1 Racing’s Nicolo Rocca also collected plenty of points in the title race by finishing fifth, Academy Motorsport / Alex Caffi Motorsport’s Patrick Lemarie, who’s subbing for Jacques Villeneuve, ended up sixth. Hendriks Motorsport’s Giorgio Maggi followed in seventh and therefore took the win in the Junior Trophy classification for drivers aged 25 and under. The Swiss edged Sebastiaan Bleekemolen, who came from 15th place on the grid. Bleekemolen made a strong comeback at the wheel of his #69 Team Bleekemolen Ford Mustang.

RDV Competition’s Ulysse Delsaux followed in ninth and scored a second place in the Junior Trophy ranks. Closing the top-10, Not Only Motorsport’s Davide Dallara took the win in the Challenger Trophy for bronze and silver drivers in EuroNASCAR PRO. The Italian bested Marko Stipp Motorsport’s Pierre Combot in twelfth and Dario Caso in 13th. Coming from the very last spot on the grid, Solaris Motorsport’s Francesco Sini crossed the finish line in eleventh. The Junior Trophy podium was completed by Colavita in 19th.

While EuroNASCAR PRO Round 10 will start on Sunday at 3:55 pm CET, the EuroNASCAR 2 stars will hit the track on Saturday 4:50 pm CET. All races will be broadcasted live on EuroNASCAR’s platforms – YouTube, Facebook, Twitch, NWES App – and Motorsport.tv.