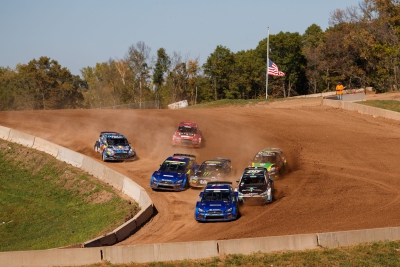 In the marquee SuperCars class, Rallycross veteran Scott Speed (USA) added a Nitro RX trophy to his collection with a textbook performance, leading the stacked field from start to finish. The victory was especially sweet as it completed Speed’s comeback from a broken back sustained at Nitro Rallycross in 2019.

In the final of the NRX Next developmental class, Sage Karam (USA) completed a stunning comeback from seventh place to take the win, becoming the fourth different winner in four rounds of competition. Spun around backwards on the first turn after a frenzied start, Karam thought his chances of making the podium were finished. Nonetheless, he pressed on and worked his way through the field to cross the finish line nine ahead of runner-up George Megennis (USA). Martin Enlund (SWE) followed up his win Saturday with a third-place finish in this contest.

In a battle of motorsports legends, Tanner Foust (USA) held off Brian Deegan (USA) to take gold in the special Side-By-Side event. It was a back and forth contest, with Foust and Deegan putting on a master class for the crowd. Scottie Lawrence (USA) secured a third-place finish on the podium.

The intense action of Nitro RX heads next to Wild Horse Pass Motorsports Park in Phoenix, Arizona on November 13 and 14. For nearly four decades, the venue has been a true destination for speed and competition. Now Nitro RX is set to unveil another bold new track that will redefine racing.

To experience Nitro RX’s high-flying action in person, tickets can be purchased at https://www.nitrorallycross.com/calendar. Fans can also watch live on Peacock in the U.S. as well as on YouTube worldwide.