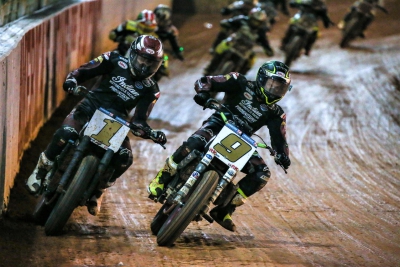 This is it. Following 15 fiercely fought Progressive American Flat Track rounds, the season-ending Honda Charlotte Half-Mile will determine the 2021 Grand National Championship under the lights at the Dirt Track at Charlotte Motor Speedway on Friday, October 8.

As they arrive in Charlotte, North Carolina, reigning two-time Mission SuperTwins presented by S&S Cycle champion Briar Bauman (No. 1 Indian Motorcycle/Progressive Insurance FTR750) and living legend Jared Mees (No. 9 Indian Motorcycle/Progressive Insurance FTR750) are separated by just four points. That means both factory Indian stars are in position to secure the 2021 crown from the top step of the podium, simple as that.

It gets a bit more complicated should another rider play the spoiler and steal away the victory. Should that happen, Mees’ slight lead earned on the strength of an active four-race win streak provides him an advantage in that he could still take the title by finishing close behind Bauman on track.

Considering their combined ability, winning percentage, and motivation, it may seem unlikely that another rider is able to elbow ahead with so much on the line, but Brandon Robinson (No. 44 Mission Roof Systems Indian FTR750) managed to do just that (twice) in last year’s similarly tight DAYTONA finale.

The scenario of a title-shifting upset just became that much more realistic with the news that Jeffrey Carver, Jr. (No. 23 Happy Trails Racing/DPC/KullyCo/Bigelow Indian FTR750) has been added to the entry list. As a reminder, in last year’s late-season battle in Charlotte, Bauman and Mees traded the lead back and forth until privateer Carver shot past them both en route to a huge win. A repeat effort could literally decide which bike the #1 plate is brandished upon in 2022.

The 2021 AFT Singles championship will be determined in Charlotte as well. While there doesn’t appear to be much room for drama as in the premier class, if second-ranked Max Whale (No. 18 Red Bull KTM Factory Racing 450 SX-FFE) manages to dethrone defending class champ Dallas Daniels (No. 1 Estenson Racing Yamaha YZ450F), you can bet some serious drama went down.

With 20 points and the tiebreaker working in his favor, Daniels merely needs to finish 13th or better in the Main even if Australian Whale wins. And if Whale doesn’t win, Daniels doesn’t need to do anything but collect his trophy.

Last year’s race at Charlotte Motor Speedway was a classic, with Daniels clinching the title thanks to a last-lap pass for victory over Mischler. Whale finished fourth, just 0.201 seconds back of the win, which sets the table nicely for another spectacular scrap on Friday night.

Now he comes into the finale having already locked down a second-career AFT Production Twins championship. That said, Texter is a racer’s racer and one making up for lost time spent as a long-time journeyman pilot. He’s unlikely to lack for motivation even with the title already taken care of.

As if that wasn’t enough, the Charlotte Half-Mile will also feature the season finale of Royal Enfield’s hugely popular BUILD. TRAIN. RACE. program and the penultimate round of the innovative Super Hooligan National Championship. BUILD. TRAIN. RACE. showcases the talent, versatility, competitiveness, and enthusiasm of female motorcyclists in its own action-packed style, while the outlaw-minded Super Hooligan series features customized heavy street bikes competing at a road race circuit, a Short Track, a Half-Mile and an asphalt oval to determine the nation’s most all-around skill heavy street bike racer.

The Honda Charlotte HM will also feature all the pomp and circumstance befitting a season finale off the track as well. NASCAR superstar Austin Dillon, driver of the No. 3 Richard Childress Racing Chevrolet Camaro ZL1 1LE will serve as the evening’s Grand Marshal ahead of the weekend’s NASCAR doubleheader at Charlotte Motor Speedway.

Additionally, the Fan Zone will offer a multitude of activities, including a Tribute to the Troops presentation to a Gold Star Family, fun in the Kids Zone, live music courtesy of series’ favorite Chasing Neon and fireworks at the end of the evening to close out the 2021 season in style.

Exclusive to the Honda Charlotte Half-Mile experience is the introduction of the Honda Talon Fan Experience. Fans may purchase one of a very limited number of passes granting access to an exclusive ride-along experience in the Official Sport SxS of AFT: the Honda Talon. This one-of-a-kind experience includes GA admission, Paddock Access Upgrade, Mission Hospitality service and more. Information and purchasing can be found at https://store.americanflattrack.com/ebooking/ticket/view/id/3325/#selectTickets.

The Paddock Access Upgrade is a certified fun multiplier. Offering access to the pits where fans can check out the race bikes and watch the riders and teams work from close range, the upgrade comes highly recommended at $40.

The gates will open for fans on Friday afternoon at 2:00 p.m. ET/11:00 a.m. PT, with Opening Ceremonies scheduled for 7:00 p.m. ET/4:00 p.m. PT ahead of the season’s final Main Event program. Live coverage of the entire weekend’s racing activities will be available on any device for only $1.99 a month via TrackPass on NBC Sports Gold.

To score the latest gear for the Progressive American Flat Track fan, visit our official merchandise store at https://store.americanflattrack.com.