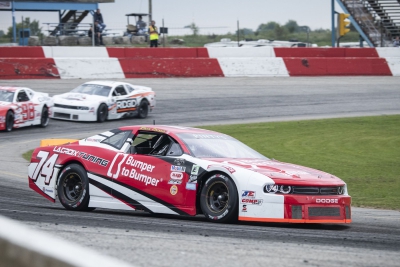 It was an eventful triple header for Kevin Lacroix last weekend at Delaware Speedway. The Bumper to Bumper team had two forgettable events and then a revelation in the last race of the season. Lacroix finishes the season in 6th place in the NASCAR Pinty's Drivers Championship.

Summary of the Canadian Tire 125

The first race of the weekend, which took place on Friday night, was pretty quiet for the  #74 Bumper to Bumper  / Lacroix Tuning driver. "It was a good race, but nothing more," explained Lacroix. "I started fifth and finished in fourth place, just short of the podium."

While Friday's event went off without a hitch, it was quite the opposite in the first 125-lap race on Sunday afternoon. "The car became very erratic during the race; I had to be careful with my driving," said Kevin Lacroix. "As long as I was protecting the inside line, it was fine, but a driver managed to get by me, making me go on the outside line. So I started to fall back in the field. One competitor insisted on being three wide in a corner, so I hit the wall, which broke my car, but not as much as the final incident with Sam Fellows, when the suspension broke."

Lacroix opted to come down pit road and not risk damaging the car further. "We tried to make a quick repair in the pits, but the car was still un-drivable, so I decided to stop the race rather than risk doing even more damage."

The final event of the NASCAR Pinty's season was certainly a different story for Lacroix; "with the car heavily damaged, we took our spare car. Since we're not allowed to do that, we started the race from the back of the field." It was a winning bet for the Bumper to Bumper team as Lacroix worked his way up to grab the lead.

"We re-discovered that this is a great car! It got a little intense at the end, with several cautions, but on every restart, I was dominant. However, there was a big incident at the end of the race, and we were stopped on the track for a few minutes. I missed the opportunity to warm up my tires properly, and on the restart, I slipped, and Andrew Ranger passed me.

Although it has been a difficult season, with many ups and downs, Lacroix draws a positive conclusion; "after my bad luck in the first race, I thought the championship was out of reach, but after my win at ICAR, we were back in the title hunt. Almost all of our bad luck this season has been out of our control, so it's a shame, but we now know that we're going to have a great oval car next year!"

"I would like to thank Bumper to Bumper, La Boullonerie and Lacroix Tuning for supporting me this season. I was especially thrilled to see the fans at the Grand Prix de Trois-Rivières, and all the red shirts in the stands!