Bridget Gets Wrecked Early at The Bull Ring in Vegas 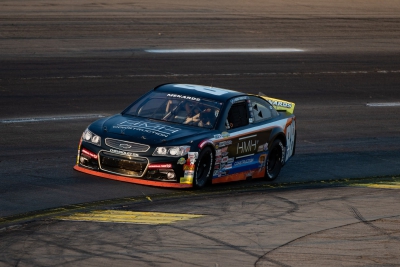 A big weekend of motorsport rolled into Las Vegas this past weekend with the ARCA Menards West Series kicking off on Thursday at the Las Vegas Bull Ring located at Las Vegas Motor Speedway.

True to form with September weather in Las Vegas it was hot! Bridget and the BMI Racing crew headed out for the combined practice/qualifying session in the late afternoon. The team spent time working with Bridget to continue to improve the setup on the HMH Construction Chevrolet SS during the session.

At the 15 minute to go mark, Bridget was sent out for a qualifying lap; she put in her best lap and at the end of the session qualified 13th out of a stacked field of 24 cars.

Bridget continued to work her lines in the HMH Construction Chevrolet SS, being patient and not using up her equipment. Another caution flag waived, and the field lined up again for another restart. The cars accelerated past the start/finish line; Bridget became the victim of an over-aggressive driver and was turned mid corner, although Bridget did her best to stay out of trouble a back marker car hit her, ultimately damaging the front of her car ending her race early.

A replay of Thursday’s Star Nursery 150 at The Bullring at Las Vegas Motor Speedway will broadcast on NBCSN on Thursday, Sept. 30, starting at 5 p.m. ET.

Bridget’s next race will be the NAPA Auto Care Center 150 presented by Berco Redwood at All American Speedway, Roseville, CA