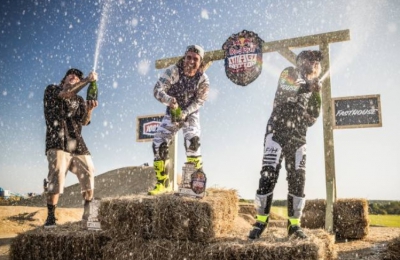 Red Bull Imagination’s second year is in the books, and it far exceeded the expectations of the riders, judges, and spectators. The event, born from the mind of freeride athlete Tyler Bereman and brought to life by course designer Jason Baker of Dream Traxx, continued to carve out its place in the pantheon of motocross events and progress the discipline of freeride motocross. Twelve of the sport’s top riders convened in Fort Scott, Kansas for an unparalleled week of expression sessions, massive features, and epic sends. The event kicked off with four days of session riding and culminated with a freeride competition unlike anything that has come before it. When it came down to the finish, fan favorite Axell Hodges threw down the winning runs to secure first place, but not before Colby Raha and Bereman gave him a run for his money in the chase to the podium.

The level of riding demonstrated at Red Bull Imagination was truly next level, in large part because of the magnitude and scale the custom-built course brought to the table. Heading into 2021, Baker and Bereman knew the stakes had to be raised for year two of Red Bull Imagination and they used their learnings from year one to redesign and expand the course in ways that would truly push the bounds of what is capable in freeride motocross. The bespoke “playground” course debuted expanded features and new concepts that moved away from the confines of “racing,” and eliminated the start and finish line, enabling full creative freedom for the riders. Everything about this year’s course was bigger, better and gnarlier than its predecessor.

Returning riders and first-time riders alike were awed and unnerved at the scale of the course. But the contest format was set up to accommodate this, with four “session-ing” days set aside for riders to adjust to and learn the unique sections before the contest. And despite the initial unease from the shock factor of the course, the tone of the week quickly went from “dipping a toe” to “diving in full force.” Rookies and veterans were all smiles under their helmets as they ripped their bikes over and around the ultimate freeride playground.

The complete lineup of riders who took to the course are:

On competition day, the riders had two five-minute windows to showcase and hit the visionary lines they had dreamt up all week long. Riders were scored on magnitude, creativity, execution, and the overall line they carved, and their best single score run counted. John Basher and legends of the sport Jeremy ‘Twitch’ Stenberg, Robbie Maddison, Steve Haughelstine and Ronnie Faisst judged the contest from a tower overlooking the entire course.

All twelve riders’ mentality was so dialed and detailed on competition day, and everyone nailed their runs, keeping both the judges and fellow competitors on their toes. Highlights from the rider’s first runs included Durham’s funbox and wallride before jumping up and over the moon booter, Jimmy Hill’s joyful riding style and on-course antics, Parsons’ whips over the big dawgs, and Golden seamlessly hitting a superwoman. But it was Hodges, Raha and Bereman who led 1-2-3 after the first round with 93, 87 and 86 points respectively.

The stakes were high heading into round two and it was this set that saw athletes up-leveling their craft even more, leaving viewers and judges virtually speechless. Every single rider delivered at or above the level of their first run, matching or raising their scores the second time around. In the chase for the podium, it was Bereman, Raha and Hodges who battled it out to hold their lead.

Bereman demonstrated ease and perfection in seamless transfers in and out of each zone, using every inch of the course with creative, technical approach. Not to be outdone, Raha responded to Hodges first run with two jaw-dropping first-ever hits that wowed the judges and showcased his aggressive style, skill and finesse on the course: he hipped across the entire quarterpipe landing and landed a 120’ backflip big dawg over the quarterpipe.

But ultimately, it was Hodges’ technical prowess and huge jumps that sealed the final standings. In a line that toured all three sections, Axell soared over the big dawgs and quarterpipe, rode a nose manual off the funbox, and executed perfect whips and nac nacs with masterful precision. After the second run, Hodges earned a winning score of 94, Raha a score of 92, and Bereman 86.

The three unique sections of the course are:

The final scores for the event were as follows:

Red Bull Imagination is described by Bereman as “[a] massive work in progress. We’re learning as we go and we’re going to continue pushing freeriding in the right direction, giving opportunities to riders that they wouldn’t have anywhere else.”