Ercoli and Dauenhauer top practice in the rain 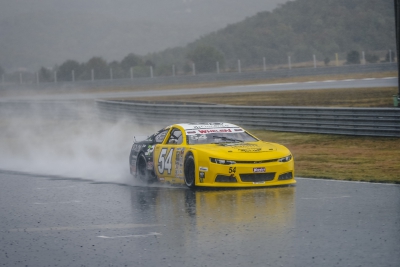 After affecting the Club Challenge competition on Friday morning, rain kept falling on the Automotodrom Grobnik and put the EuroNASCAR competitors’ skill to test in the opening stages of the NASCAR GP Croatia. Gianmarco Ercoli was quickest overall in EuroNASCAR PRO, while points leader Tobias Dauenhauer took first place in EuroNASCAR 2.

With the changing weather playing a role in the already heated battle for both NWES championships, this weekend’s races from the Croatia Riviera promise to be a must-see for the EuroNASCAR fans.

With the rain constantly falling on Automotodrom Grobnik, it was Gianmarco Ercoli who posted the quickest lap time overall in practice, thanks to a 1:35.301 lap he set in the second session. The Italian driver of the #54 CAAL Racing Camaro bested his teammate Alon Day, who set the fastest lap in the first session on his #88 Monster Energy Camaro, by 0.321 seconds. Ercoli also led the Junior Trophy classification.

After grabbing his first EuroNASCAR PRO three weeks ago in the Czech Republic, Vittorio Ghirelli posted a 1:35.747 lap in practice at Grobnik, putting the #50 Hendriks Motorsport Mustang in third place ahead of the #22 DF1 Racing Camaro of Nicolo Rocca. Giorgio Maggi rounded out the top-5 on the #18 Hendriks Motorsport Mustang, followed by points leader Loris Hezemans.

Lucas Lassere drove the #64 Speedhouse Mustang to the seventh place overall with a couple of tenths advantage on Jacques Villeneuve and the #5 Academy Motorsport / Alex Caffi Motorsport EuroNASCAR FJ. Currently sitting fifth in points, Sebastiaan Bleekemolen took ninth ahead of Fabrizio Armetta, who led the Challenger Trophy by rounding out the top-10.

EuroNASCAR 2: Who can catch Dauenhauer?

It was all Tobias Dauenhauer in the EuroNASCAR 2 practice sessions of the NASCAR GP Croatia. After winning both races at Most, the German Hendriks Motorsport driver immediately picked up the pace at Grobnik and topped the charts twice on the #50 Mustang. Dauenhauer clocked a 1:36.100 lap around the 4,168 Km road course.

Vladimiros Tziortzis on the #1 Academy Motorsport / Alex Caffi Motorsport Mustang looked like the strongest opponent for the Heppenheim native. Tziortzis was second quickest overall, 0.416 seconds behind Dauenhauer. Third place went to Martin Doubek – the man who’s chasing the #50 Mustang in the points standings – ahead of Simon Pilate and the #66 Df1 Racing Camaro.

Making his EuroNASCAR debut, Melvin de Groot brought the #69 Team Bleekemolen Mustang to the fifth place, leading both the Rookie Trophy and the Legend Trophy.  Massimiliano Lanza was right behind him both in the overall classification and in the Legend Trophy.

Pierluigi Veronesi ended up seventh ahead of 16-year-old debutant Leonardo Colavita, who made a strong impression in the rain despite driving the EuroNASCAR car for the first time in these conditions.

Justin Kunz on the #22 DF1 Racing Camaro and Advait Deodhar on the #56 CAAL Racing Mustang closed the top-10, while Alina Loibnegger took the Lady Trophy honours in 20th place for Solaris Motorsport.

Starting on Saturday September 18, qualifying and all races of the NASCAR GP Croatia will be streamed live on the EuroNASCAR social media platforms – Youtube, Facebook and Twitch – alongside the NWES app and Motorsport.tv.