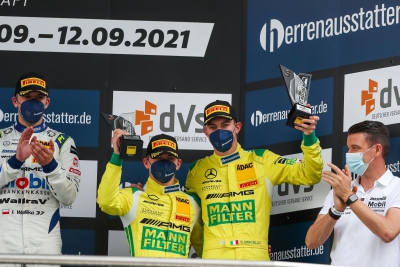 The halfway stage of the ADAC GT Masters at the DEKRA Lausitzring was the ultimate season highlight for MANN-FILTER. In the 70th anniversary year the two MANN-FILTER Team LANDGRAF–HTP/WWR drivers made the premium filter brand proud with a place on the podium. The many spectators in yellow-green fan clothing and the familiar MANN-FILTER caps also gave Luci Trefz a special boost – by coming ninth in the second race, the youngster proved once again that he can keep up with experienced GT3 drivers.

The greatest challenge of the weekend was the DEKRA-Lausitzring itself. Because of its fast sections, narrow curves, and bumps, the drivers describe it as very "technical". At 3.478 kilometers in length, the track is one of the shortest in the 2021 ADAC GT Masters Calendar.

Consistency is the key to success

When the starting gun went off for the first race of the weekend, driver Raffaele Marciello was easily able to hold position 4. Then Buhk took over for the second stint. Unfortunately, oil leaking from a competitor’s car meant a 40-minute interruption to the race. Nevertheless, Buhk crossed the finishing line still in fourth place, meaning that the team collected a solid 13 points. The Audi Mamba from the Land-Motorsport team was less fortunate. Luci Trefz started the race in the 21st position but was forced to finish early because of a technical fault.

On Sunday, the Buhk/Marciello duo had a fitting gift for the 70th MANN-FILTER anniversary: At the start of the second race, Buhk did not hesitate long, moving straight into third place. His teammate Marciello refused to take any unnecessary risks when his turn came and was able to finish the weekend with the bronze trophy. "It was important that we took home points and can continue the fight for the championship," says Maricello, summing up the weekend’s events. "Obviously we were hoping for more, but you can't win all the time. We're happy with our haul of points, but now we have to focus on finishing the job and winning the championship title."

Youngster Luci Trefz (19, Germany) once again highlighted his skills: After his teammate, Christopher Haase (33, Germany), handed over the Audi during the second race in nineth place, the 19-year-old demonstrated his stamina. He did not cave in to the pressure from the cars behind. Thanks to his courage in the race, his ninth place collected seven championship points. "Luci did an incredible job toward the end. He had to handle two safety car phases and keep his opponents at bay behind him. At the same time, he kept pushing forward", says Audi sports driver Christopher Haase in praise of his teammate.

For the first time since the corona pandemic started, spectators were allowed back into the paddock. This was especially evident on the 70th anniversary of the premium filter brand: The yellow-green caps were everywhere, which was a special highlight, particularly for the youngest member of the team: "It was my first time taking part in a pit walk and, wow, so many people! So many were wearing yellow-green in the stands as well. There was so much energy in the paddock. It was wonderful to see that the fans were able to be there to experience the sport we love so much. I'm in my third year with MANN-FILTER now and am absolutely loving it. MANN-FILTER has become like family to me, and I'm glad that I'm part of it and able to join in the anniversary celebrations."

MANN-FILTER thanked its loyal fans with a special foil for the ADAC GT Masters halfway stage. Both the Audi and the Mercedes Mamba were emblazoned with a large sticker for the filter brand's big birthday.

In the fight for the championship, the team had initially hoped to reascend to the top of the table, but this was not entirely successful. Even so, the third place by Buhk/Marciello was enough to reduce the lead. Just three points separate the MANN-FILTER Duo from the top position.
The battle for the title will blaze up again at the next ADAC GT Masters race at the Sachsenring in early October (10/01 - 10/03).