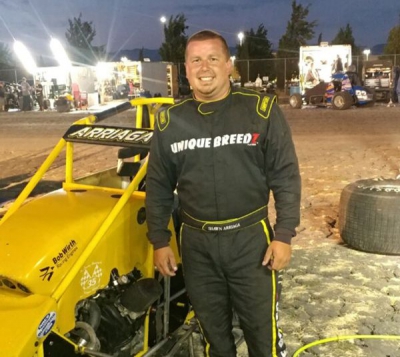 Bower and Arriaga split the heat races and made up the front row starters for the 20-lap contest. Arriaga from the outside pole took the lead into turn one on lap one. 16-time series winner David Prickett of Fresno showed Bower a nose for second on lap two into turn one, but Bower held onto second. Bower closed in on Arriaga on lap seven with several looks to the inside on both ends of the race track.

Bower then had a strong run up the inside of Arriaga on lap 11 but Arriaga held the lead. Bower then slowed on the following lap to require a caution. Bower was unable to continue, giving Arriaga a clear opportunity to win.

Prickett battled for second with the Kevin Felkins’ owned entries of Sage Bordenave of French Camp and Brody Petrie of Upperlake before a red flag for Cameron Beard of Atwater turning over on the front stretch after contact with Petrie. Beard was able to refire and continue, however.

Arriaga faced a challenge from Prickett on the backstretch on the restart, driving ahead for the exciting win. Bordenave passed Prickett around the outside for second before his teammate Petrie took over third as well. Arriaga went on to later win the USAC West Coast 360 feature as well at Petaluma Speedway.

Western Midget Racing competes next at the 61st Johnny Key Classic, August 21st at Watsonville’s Ocean Speedway. Tickets available online or at the gate. Coverage will also be available on www.FloRacing.com