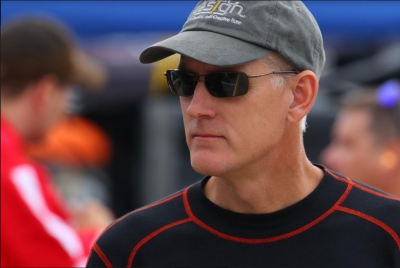 Eric Caudell drove the No. 7 Doug Design / Chickering Concrete Toyota to a 14th-place run on Saturday at Iowa Speedway, following a day filled with headaches and challenges, including an early spin in the Shore Lunch 150.

Practice was hampered by a few gremlins for the No. 7 CCM Racing team, including problems with the radio communications, the alternator, and damage sustained to the splitter once the No. 7 was able to make a few laps. Caudell was able to run a total of 19 laps during the session, winding up 17th on the speed charts with a time of 26.479 seconds at 118.962 mph

Up next was qualifying for the Shore Lunch 150. The No. 7 CCM racing crew was able to make the necessary repairs and adjustments to the car in between practice and qualifying. Caudell would go on to qualify 19th, with a lap time of 26.573 at 118.541 mph.

The green flag waved shortly after 8:00PM CT and Caudell was able to gain a couple of positions early. He reported the car was good but a little loose. This loose condition prompted a spin while passing another car on lap 19.

However, Caudell was able to keep the car out of the wall, and as all four tires were still up, crew chief Jeremy Petty opted to wait until the first scheduled break on lap 50 to come in to change tires.

During the scheduled caution period, Petty also made adjustments to improve the loose condition Caudell was battling on track.

Once back green, Caudell reported that he was still fighting a loose condition in the center and made some slight contact with the wall prior to the second scheduled caution of the night on lap 100.

Petty continued to adjust on the car during the ensuing stop as the pit crew changed four tires and fueled the car before the race resumed for the final stretch of the race.

Despite the issues during practice, the early spin, and continued challenges with handling throughout the night, the No. 7 CCM Racing team finished in the 14th position for the team’s third top-15 run of the 2021 season.

“Considering how many times the day went south, we did pretty good,” said Caudell. “That doesn’t supersede my intention to be in the top 10 and my competitive spirit wanted to be running up front … but I’m very happy with how we performed as a team, ‘cause it went south a bunch of times and we battled back and made the best of it we could.”