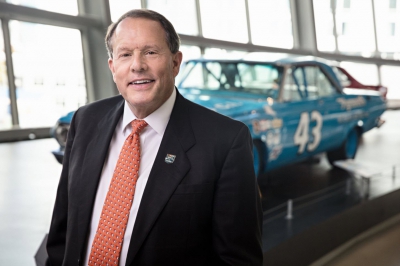 Saturday's broadcast of the CARS Tour's 4th Annual Throwback 276 at Hickory Motor Speedway will now feature one of the most recognizable voices in stock car racing. Today, Pit Row TV announced Winston Kelley, Executive Director of the NASCAR Hall of Fame and MRN Radio personality, will serve as pit reporter and honorary event historian for the race broadcast. Kelley will be joined by a booth team of others passionate about the sport's history including play-by-play announcers Steve Post and Tony Stevens, along with host Lenny Batycki.

The Honeywell Home Throwback 276 by Baker Distributing has quickly become a traditional midsummer pilgrimage for race fans across the country. Drivers and teams from the Solid Rock Carriers CARS Tour redesign their paint schemes, crew uniforms, and even their car numbers for a one-off night where they not only create new memories for themselves and the fans in attendance, but also recall old ones with friends and many former greats of auto racing who attend.

"The addition of Winston Kelley to our line-up of announcers continues Pit Row TV's commitment as a leading streaming service provider of national caliber racing entertainment and content with familiar, interesting personalities and exemplary production quality for our subscribers," said Tony Stevens, Chief Steward at Pit Row TV. "Winston was one of my heroes growing up and someone I looked up to as an example of what a motorsports media personality should be."

"I've heard a lot about this event from Postman (Steve Post) and many others in the industry. It's a great way to honor our sport's deep history from grassroots to the Cup Series," said Winston Kelley. "It is truly an honor to be asked to join the Pit Row TV team. I'm excited to see so many long time friends, make new ones, share stories and memories, and most of all enjoy a great night of short track racing, the true backbone of our sport."

Viewers who tune in to the Honeywell Home Throwback 276 by Baker Distributing can expect to see traditional Saturday afternoon qualification coverage on Pit Row TV and CARS Tour's various social media channels, with driver introductions and the main broadcast slated to begin at approximately 7:30pm ET. The first green flag for the 138-lap super late model feature waves at 8pm ET with the late model stock event running immediately afterwards. To watch the events, fans can visit pitrow.tv/watch or carstour.tv/watch for various ways they can see the action including most popular platforms and apps like Roku and Amazon Fire TV.