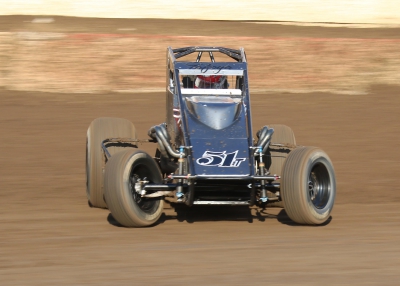 The impressive 2021 season for Eddie Tafoya Jr. continued last Saturday night when he recorded a USAC/CRA career best finish when he placed third at Perris Auto Speedway.  In addition, he also received the race “Hard Charger Award” for passing nine cars after starting 12th.  The up-and-coming driver and his crew did not have a lot of time to rest on their laurels as hours later, they hopped into the Specialty Fasteners #51T race hauler for the long drive to the Midwest for Indiana Sprint Week.

In only his second full season in the USAC/CRA Series, the Chino Hills, California based driver journeyed back to Indiana in April to pick up a new DRC Chassis.  Since getting that car, he has become one of the most watched drivers in the series scoring four top 10 finishes in five races.  Two of the four, including last Saturday, were top five finishes.  In his last four races, he has climbed from 29th in the championship standings all the way up to 13th.

Saturday’s race saw Tafoya open the night qualifying 12th in the 22-car field.  He followed that up with a third-place result in his heat race.  For the main event, he had to start outside the sixth row in 12th.  Things started slow in the 30-lapper as he moved forward two spots to 10th in the first five laps.  Ten laps later, he had only progressed one more position.  However, he found a great line down low and by the 21st circuit, he was up to sixth.  A red flag necessitated a restart on lap 28 and at that point, the 24-year-old took the final green flag of the race in fourth.  He did not stay there for long.  A picture-perfect pass on the back straight with two laps to go earned him the right to step on the podium at a USAC/CRA race for the first of what will be many times in his career.

“Tonight started out pretty slow,” Tafoya told the crowd after the race.  “We had a little trouble in qualifying.  We had to start the main event farther back than we like to.  It feels good to comeback like that, and it definitely builds some confidence going into Sprint Week (in Indiana).  I started out slow and I found a line in one and two.  Everyone was following each other on the top and I had grip down low.  It would slingshot me down the back chute and set me up perfect for sliders in turn three and four.”

Tafoya and crew arrived in Indiana early Wednesday morning, and they are getting ready for the busiest week of the year with seven races in nine nights.  The action will kick off this Friday night at the Gas City I69 Speedway.  It will be followed up by races Saturday and Sunday at the Kokomo and Lawrenceburg Speedways.  Next Monday and Tuesday will be nights off for rest and car repairs before going four straight nights at the Terre Haute Action Track, Lincoln Park, Bloomington, and Tri-State Speedways.  Last year his best “Sprint Week” finish came at Lawrenceburg when he placed 19th.

For Midwest fans, the great looking 2021 Team Tafoya shirts will be available during “Sprint Week.”  For those who cannot make it to the track, contact Eddie Tafoya Jr. on his Instagram or Facebook page and he will be able to take your order and ship a shirt to you.