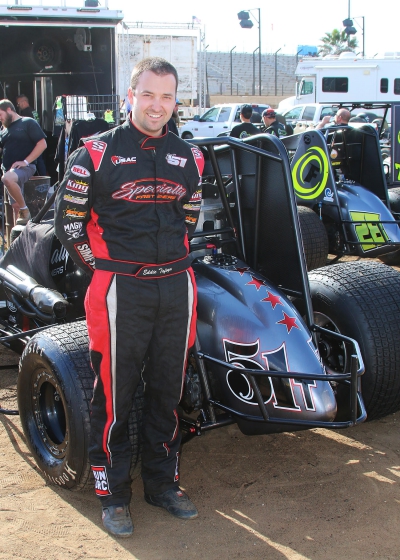 The cat that had been restlessly stirring in the bag finally escaped last Saturday night at Perris Auto Speedway when Eddie Tafoya Jr. scored a career best fourth-place finish in the USAC/CRA Sprint Car Series.  The result came on a night when the young driver was fast from the first lap in qualifying to the final time around the famous half-mile clay oval in the main event.

Early on it looked like the sweltering heat that had engulfed the area with 100-degree temperatures for six straight days, was going to keep the crowd to a minimum.  However, about 20 minutes before the first race, fans started streaming into the facility from every direction. When they settled down to watch, 20 drivers comprised the USAC/CRA portion of the show.  One of them was Tafoya who laid down a sizzling lap of 16.770.  That was good enough for fourth fastest in the field.

Tafoya’s impressive qualifying time applied a little extra pressure on him for his 10-lap heat race. If he finished within the top four in the heat, he was pretty much assured of a second row starting spot in the 30 lap main event.  On the initial start, the Chino Hills, California racer was fifth into turn one, but a nice inside move saw him advance to the fourth-place spot he needed to be in.  By the end of the second circuit, he had advanced one more position to third.  After being shuffled back to fourth on a restart, he did a great job of holding off one of the series’ longtime veterans for fourth and earning his inside row two starting spot for the main.

With the large, enthusiastic crowd cheering the cars on at the start, Tafoya raced into turn one in a battle for the third-place spot.  Racing hard against a field of wily veterans, the dark haired, handsome driver slipped back to sixth by the fifth lap and he stayed there until a caution came out with six laps to go.  For the restart, he was in fifth, but that was not good enough.  He quickly advanced to fourth, but he was not about to rest on his laurels.  He nearly reeled in the third-place car which was being driven by one of the top drivers in the series.

When the race ended, Tafoya had his career best fourth place finish in the USAC/CRA Series.  Perhaps more importantly, the pup jumped up on the porch with the big dogs and proved he belongs.  That did not go unnoticed by the fans as they descended on his pit after the race to wish him congratulations on the fine result.

The fourth-place finish catapulted Tafoya seven-spots higher in the championship standings from 25th to 18th.  He will get his next chance to advance to a loftier position when the series resumes on Saturday, July 3rd, at the Santa Maria Raceway.

Fans can get one of the team’s great looking new shirts and meet Tafoya and his crew in the pits after any of the upcoming USAC/CRA races.  For those who cannot make it to the track, contact Eddie Tafoya Jr. on his Instagram or Facebook pages and he will get you all set up.

Tafoya and his team would like to thank the following sponsors for being a part of the 2021 racing campaign.  Specialty Fasteners, Circle Track Performance, DRC Chassis, Ryder Racing Engines, Benic Enterprises, Simpson, and Bell. If you or your company would like to become a part of the team in 2021, please give them a call or send an E-mail to the contact information at the top of this press release.