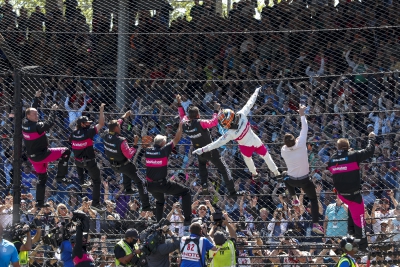 2021 Indianapolis 500 winner Helio Castroneves will sit down for a one-on-one interview with former Indianapolis Colts All-Pro punter Pat McAfee for a special “virtual” SiriusXM Town Hall event with an audience of SiriusXM listeners and race fans.

The hour-long broadcast event will air on Thursday, June 24 (6:00 pm ET) on SiriusXM’s NBC Sports Audio channel, available to subscribers nationwide in their car (SiriusXM channel 211) and on their phone and connected devices at home with the SXM App.  It will replay on Sunday, July 4 (11:00 am ET) on SiriusXM INDYCAR Nation (channel 205 in the car and on the SXM App), ahead of the Honda Indy 200 at Mid-Ohio race.  Subscribers can also hear the show anytime after the debut on the SXM App.

On May 30, 2021 Castroneves, driving for Meyer Shank Racing, won his fourth career Indianapolis 500, making him part of an exclusive club of four-time winners which includes open-wheel legends A.J. Foyt, Al Unser and Rick Mears.  Annually the biggest event on the INDYCAR calendar, this year’s race set a record as the fastest Indianapolis 500 ever.  It was also the first NTT INDYCAR® SERIES win for Meyer Shank Racing.

Pat McAfee, who since his retirement in 2017 from his NFL career has become one of sports media’s most popular and compelling personalities, made SiriusXM the exclusive radio home of his daily show last fall.  The Pat McAfee Show airs every weekday from noon to 3:00 pm ET, live from Indianapolis, on SiriusXM’s Mad Dog Sports Radio channel.

“I’m so excited to join SiriusXM for its Town Hall event this week,” said Castroneves. “This Indianapolis 500 win was so different from the rest and in many ways meant a lot more and I couldn’t have done it without the support of SiriusXM and AutoNation. The race was the largest sporting event since the pandemic and to do it with Meyer Shank Racing was a dream come true. Now, I can’t wait to celebrate with SiriusXM fans and subscribers!”

“I’m pumped for the opportunity to be leading this free flowing chat with Helio, a certified legend in the racing world, who’s fourth Indy 500 Celebratory Milk Moment cemented his legacy as one of the greatest of all time,” said McAfee.  “Should be an absolute blast!”

SiriusXM has been a sponsor of Meyer Shank Racing since their INDYCAR debut in the 2017 Indianapolis 500.  The company has been on the No. 60 car driven by Jack Harvey every season since that time, including for Harvey’s breakout INDYCAR podium finish in 2018.  The 105th Running of the Indianapolis 500 was Castroneves’ first of six races with MSR.  While SiriusXM will continue to be a co-primary sponsor on the No. 60 car, SiriusXM is also sponsoring Castroneves’ No. 06 car in two additional races – the Indianapolis Motor Speedway Road Course race on August 14, and the Grand Prix of Portland on September 12.