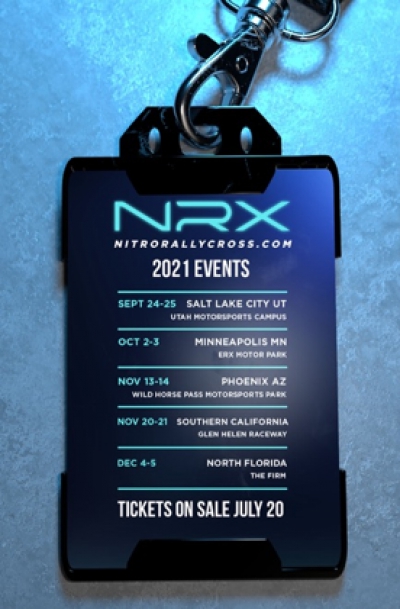 Nitro Rallycross 2021 is still set to kick off at its birthplace, Utah Motorsports Campus, on the weekend of September 24 – 25, complete with the huge double-cross jumps that have taken motorsports excitement to new heights. Then the high-adrenaline action will shift to ERX Motor Park outside Minneapolis, MN on October 2 – 3, one week earlier than originally scheduled. Next, the competition will heat up Phoenix, AZ’s Wild Horse Pass Motorsports Park on November 13 -14. Following that, in a new addition to the series, NRX will take over San Bernardino, CA’s famed Glen Helen Raceway on November 20-21 (replacing Reno, NV’s now-closed Wild West Motorsports Park). Then the checkered flag will drop on NRX 2021 at North Florida’s The FIRM December 4 -5.

Motorsports icon Travis Pastrana, the boundary-breaking force behind Nitro Rallycross, says, “It’s awesome to see NRX’s first championship series come together. Glen Helen Raceway is a great addition to the calendar. Such an iconic venue. I raced my first outdoor national motocross event there when I was 16 years old and been there for so many other amazing events. It’s a perfect fit for NRX’s multi-surface courses.” Pastrana adds, “Southern California also has a rich Rallycross history and passionate fans, who over the years has seen fantastic finishes from the sport’s biggest drivers.”

At every stop, teams will have to contend with NRX’s epic courses, which incorporate the steep berms, banked turns and 100-ft gap jumps that champion drivers like Tanner Foust consider, “The most unique, exciting, fun, amazing Rallycross track ever built.” These bespoke design elements will be tailored to heighten the tough challenges of each location’s unique setting, creating insane tracks that will push drivers – and cars – to their limits as they battle through imposing mountains and dry deserts into dense forests and sprawling wetlands.

Also, as the pace of reopening accelerates across the U.S., Nitro Rallycross announced that tickets for all five races will go on sale to the general public starting Tuesday, July 20th. Fans will soon be able to experience NRX live and in-person, where they can hear hard-charging 600 hp Supercars as they tear around each corner and watch as they rub fenders in wide-open, head-to-head action. Look for more on-sale details to be announced soon.

Joe Carr, CEO of Thrill One Sports & Entertainment - parent company of Nitro Rallycross - says, “We’re so excited to both add Glen Helen Raceway to the NRX 2021 calendar and to be able to open up the series to fans. We are eager to drop NRX into gear and for fans to be able to catch all the action in person.”
Rate this item
(0 votes)
Tweet
« Magnussen Feels Magnificent over Return to Victory Lane IMSA Confirms Technical, Sporting Details for New GTD PRO Class Debuting in 2022 »