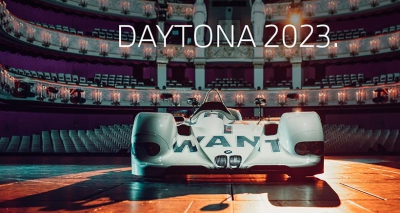 BMW M Motorsport is the fourth manufacturer to confirm it will develop an LMDh prototype for IMSA WeatherTech SportsCar Championship competition beginning in 2023.
The German marque joins Acura, Audi and Porsche, which all previously announced their intent to develop cars to compete in what will become the WeatherTech Championship’s top-tier class.
“BMW is back on the big motorsport stage,” Markus Flasch, CEO of BMW M GmbH said. “In entering the LMDh class, BMW M Motorsport is fulfilling the prerequisites to challenge for overall victory at the most iconic endurance races in the world from 2023. We will be fully focused on tackling this challenge.
“There is a spirit of optimism here,” Flasch added. “BMW has a successful history in prototype racing – the Le Mans victory in 1999 was unforgettable. Reviving this story in a modern prototype with M Power will thrill fans of BMW M Motorsport. The LMDh concept guarantees maximum cost control and offers a wide range of possible applications, including the IMSA series in North America, an extremely important market for BMW M. We are all eager to get stuck into the LMDh category with a compact and highly efficient team setup.”
Announced in January 2020 at Daytona International Speedway as a shared platform between IMSA and the Automobile Club de l’Ouest (ACO), LMDh is based on a cost-capped car that will generate more than 670 horsepower (500 kilowatts) from the combined output of an internal combustion engine and a hybrid powertrain. Competing automobile manufacturers may develop their own branded engine and stylized bodywork around the standardized chassis. Bosch, Williams Advanced Engineering and Xtrac will work in concert to provide the spec hybrid powertrain system for all LMDh cars.
A BMW M Motorsport works involvement, with two cars, is planned for the WeatherTech Championship. The works team and driver lineup for the two LMDh prototypes will be announced at a later date.
“Everyone in our motorsport team shares the same motivation: We want to test ourselves against our strongest opposition at the racetrack – and to celebrate victories for BMW,” said Mike Krack, Head of BMW M Motorsport. “As such, the LMDh project is a real affair of the heart for us and exactly the new challenge we were hoping for. An extremely exciting project awaits us. To challenge for overall victories in Daytona and Sebring is a massive motivation. We have a lot of work ahead of us, but the anticipation is immense.”
BMW’s most recent prototype success includes victories in 1999 with the BMW V12 LMR at the 24 Hours of Le Mans and the Mobil 1 Twelve Hours of Sebring Presented by Advance Auto Parts, and three consecutive IMSA season championships with Chip Ganassi Racing’s Riley-BMW from 2010-12 along with Rolex 24 At Daytona wins in 2011 and ’13.
“BMW’s history in prototype sports car racing is tremendous and we are eager to see how the next chapter unfolds beginning at Daytona in 2023,” said IMSA President John Doonan. “Having four confirmed manufacturers for LMDh already, with even more potentially waiting in the wings is validation for the platform we created alongside our partners at the ACO. The market is speaking loudly and the future is bright for LMDh and the IMSA WeatherTech SportsCar Championship.”
Rate this item
(0 votes)
Tweet
« Kirkwood Sweeps Indy Lights Detroit Double-Header In Form Brody Roa Tries for Two in a Row at Perris – New Merchandise Store Is Open »