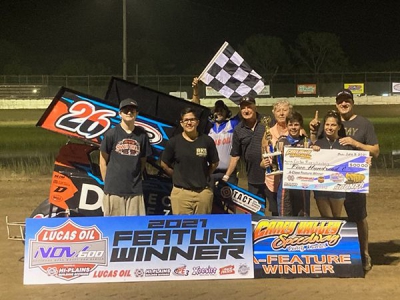 Mesa, Ariz.’s Corbin Rueschenberg steered the #26 Driven Chassis to victory lane on Wednesday night in the National Open Wheel Sooner 600 Week, taking the A-Class feature win on the opening night of the five-night event. The victory at Caney Valley Speedway in Kansas makes Rueschenberg one of the youngest to win an A-Class feature on the NOW stage and moves him within 41 points of the national championship points lead.

Rueschenberg’s night opened with heat race wins in both A-Class and Restricted. Rueschenberg started the A-Class main event from the outside pole and fell to third briefly on the backstretch on lap one. He took over the lead on lap seven and dominated the 25-lap affair for his first A-Class triumph.

In Restricted, Rueschenberg had to fire off from tenth on the grid for the 20-lap contest. He advanced to fifth at the checkered flag, leaving Kansas with a third-place ranking in the national championship for Restricted.

The Sooner 600 Week moves on to Creek County Speedway in Oklahoma on Thursday night with live coverage on www.FastFourMedia.com Rueschenberg won the Restricted feature at Creek on April 30th along with a sixth place A-Class run that same night. He will look to take advantage of his momentum back into Creek tonight.

After a stop at Red Dirt Raceway on Friday, the Sooner 600 Week moves to Port City Raceway on Saturday. Rueschenberg competed at Port City in a points race on June 5, taking top-ten finishes in both Restricted and A-Class.