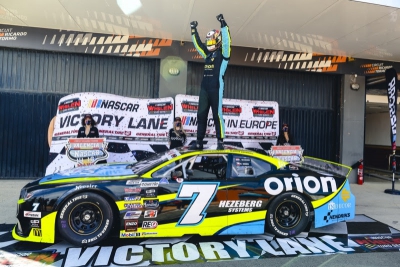 Martin Doubek was unstoppable once again in EuroNASCAR 2 Round 2 at the 4-km Circuit Ricardo Tormo. The driver of the #7 Hendriks Motorsport Ford Mustang started from pole, led all 15 laps and scored his second consecutive win of the 2021 NASCAR Whelen Euro Series season. The 26-year-old now leads the overall standings with 80 points on his account.

For Doubek it was the fourth EuroNASCAR 2 career win after the two he collected at Circuit Zolder in the 2020 NWES season and the one he grabbed on Saturday. The NWES veteran, who’s part of EuroNASCAR since the 2015 season, made a good start and pulled away from the field right in the first lap. After that he administered his advantage and Hoosier Racing Tires to be first under the checkered flag.

“I’m very happy”, said an exhausted Doubek after the race. “The car is perfect since we hit the track on Friday for Free Practice. With Loris Hezemans, I can rely on a very quick teammate and the team is doing an exceptional job. We found a good setup that made it look so easy to get two wins here in Valencia.”

Doubek’s teammate Tobias Dauenhauer from Germany ended up second after a fierce battle with Academy Motorsport / Alex Caffi Motorsport’s Vladimiros Tziortzis from Cyprus. The Hendriks Motorsport driver and 2019 EuroNASCAR 2 runner-up managed to keep the 24-year-old youngster at bay and when they crossed the checkered flag, 2.597 seconds separated the two. After bad luck hampered his Saturday’s race with a blown tire, Justin Kunz showed his potential by piloting the #22 DF1 Racing Camaro to fourth.

Double V Racing team boss and driver Pierluigi Veronesi had a solid run in his #27 Mustang: the Italian completed the top-5. After struggling with braking issues on Saturday, Simon Pilate also fought his way back into the top-10 with a solid sixth place. The Belgian completed the race ahead of Advait Deodhar. Deodhar made a mistake in the first race that shuffled him down the order, but he managed to strike back by finishing seventh.

EuroNASCAR newcomer Alberto Panebianco scored his second consecutive Rookie Trophy win by crossing the finish line eighth at the wheel of the #89 Not Only Motorsport Chevrolet Camaro. Vict Racing’s Paolo Valeri won the Legend Trophy and grabbed the second place in the Rookie Trophy in ninth ahead of Ian Eric Waden, who rounded out the top-10 and joined the podium for drivers aged 40 or more. The Legend Trophy podium was completed by Marko Stipp Motorsport’s Yevgen Sokolovskiy. His teammate Miguel Gomes was third in the Rookie Trophy.

Arianna Casoli had to battle hard for her win in the Lady Trophy. The Italian NWES veteran and Solaris Motorsport’s Alina Loibnegger delighted the fans – up to 2000 were allowed on the grandstands for the first time since 440 days – with a great duel that ended in the Italian’s favour. Francesco Garisto ended up 14th due to a contact with Fabrizio Armetta in the battle for third place. Armetta got a drive through penalty for his move on the young Italian.

While the EuroNASCAR 2 Championship will return for Round 3 and 4 at Autodrom Most in the Czech Republic, the EuroNASCAR PRO Round 2 will take place today at 14:15 CEST at Circuit Ricardo Tormo. The closing race of the NASCAR GP Spain will be broadcasted live on EuroNASCAR’s social media channels – YouTube, Facebook, Twitch – and Motorsport.tv.