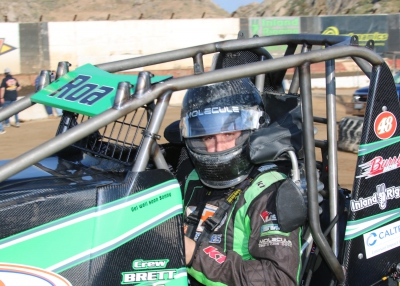 On a night of highs and lows, veteran USAC/CRA Sprint Car Series driver Brody Roa raced to a third-place finish last Saturday night at the Bakersfield Speedway.  It was the affable driver’s second top three finish in the series in 2021.

The 30-year-old Garden Grove, California resident started off the night in fine fashion when he out-qualified the 24-car field with a sizzling lap of 16.20 on the 75-year-old banked 1/3 mile clay oval.  He followed that up by going from his sixth place starting spot to finish third in his 10-lap heat race.

The Garden Grove, California based racer was looking good for the 30-lap main event.  He started on the outside of the third row and when the green flag flew to start the race, he looked like he was shot out of a cannon.  Some nice opening lap moves saw him momentarily push the nose of his brilliant green #91R car as far up as third.  However, trouble struck at the outset of lap two.  The car next to Roa and the car in front of him got together. Roa ended up getting tagged and slid to a sudden stop on the low side of the front straightaway.  Seconds later another car clobbered him.

Fortunately, neither Roa or the car suffered any significant damage and he restarted at the back.  He quickly began to slice and dice his way through the field in a race that was plagued by tangles resulting in red and yellow flags.   As the laps counted down, track conditions proved to be anything but conducive for passing.  In addition, he was coming up on the faster competition who were harder to pass.  The black helmeted racer remained undaunted and maintained his focus and determination.  By the time the checkered flag ended the race, he had passed 18-cars from his restart position to finish a very impressive third.

The determined march towards the front allowed Roa to maintain his fourth-place position in the USAC/CRA championship standings.  His next race will come when Perris Auto Speedway hosts the prestigious Annual Salute to Indy on Saturday, May 22nd.

If you or your company would like to jump on board and receive recognition throughout the year, please give the two-time USAC champion racer a phone call or drop him a note at the contact information at the top of this release.  You can also contact him if you would like to put him in your car in a USAC National Series race when his west coast schedule permits.