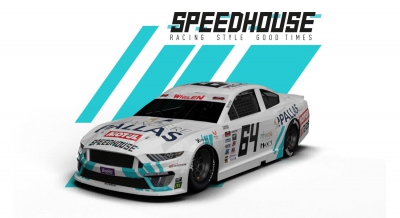 The 2010 champion himself will drive the team’s Ford Mustang in EuroNASCAR PRO. Lasserre has been part of the series since its inception in 2009 and experienced the transition into the official European NASCAR Championship in 2012. In 2018, the Pau native scored his last EuroNASCAR PRO win to date with Mishumotors. With all his experience, he will do his best to bring the Speedhouse Mustang to Victory Lane for the very first time after the team proved to be among the best in the EuroNASCAR Esports Series.

Another Frenchman from the southwest of the country will enter the EuroNASCAR 2 Championship for the seventh time: Eric Quintal. Since the series joined NASCAR in 2012, Quintal has been a regular driver in the NWES Championship dedicated to young talents and gentlemen drivers. Quintal for sure aims to stand at top of the Legend Trophy podium – the special classification for drivers aged 40 or more – after every race.

“For sure the aim is to bring Speehouse on the top in each category”, said team boss Lasserre. “We have confidence in our capacities but we will need to work from race to race. We are all motivated and we are sure that we will have success. Eric has been driving the car for a long time now so we are confident that he can make the difference.”

For the Club Challenge – the regularity based challenge during NWES race weekends – Speedhouse signed two drivers. Paul Jouffreau, who ended up ninth after a strong EuroNASCAR Esports Series debut on iRacing, will drive the #64 Ford Mustang. Marcel Berndt from Germany will take the wheel of the #17 car that will be branded Speedhouse by 42 Racing for the three 30-minutes sessions of the Club Challenge.

“The young Frenchman Paul Jouffreau will make the big step from karting into NASCAR”, continued Lasserre. “I will support him with all my experience I have and teach him how to drive those beautiful V8 EuroNASCAR cars. He will be for sure part of the next generation of European NASCAR drivers. We will also work with Marcel Berndt from Germany, who will be driving the #17 Speedhouse by 42 Racing car in the Club Challenge. He is a very talented race car driver.”

The 2021 NWES season will kick off on May 15-16 at Circuit Ricardo Tormo in Valencia, Spain. Qualifying and races will be streamed live on EuroNASCAR’s social media channels – YouTube, Facebook, Twitch – and Motorsport.tv.