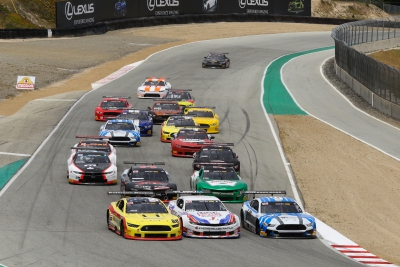 After losing out on the MOTUL pole in the closing moments of Friday’s qualifying session, Rafa Matos was not to be denied in Saturday’s Trans Am SpeedFest TA2® race at WeatherTech Raceway Laguna Seca. (Race Recap Video)

Matos, driving the No. 88 3-Dimensional Services Ford Mustang, passed local favorite Thomas Merrill to the inside in Turn 11 to take the lead on the 10th lap, and fended off several challenges to score his 11th career victory in the highly competitive Trans Am Series presented by Pirelli TA2 ® event. The pass for victory earned Matos the ChillOut Move of the Race.

The 2020 Champion Mike Skeen finished second, with Merrill adding to his career count of Laguna Seca podiums with a run to third place.

In a wild Trans Am West Coast Championship race, Tim Lynn took the victory with a last-lap pass in the No. 17 Roof Options Ford Mustang. He placed 12th overall in the 33-car field, which included 16 West Coast competitors.

The drama continued past the checkered flag, as Matos’ Mustang belched smoke in victory lane after having engine issues in the final laps of the race. 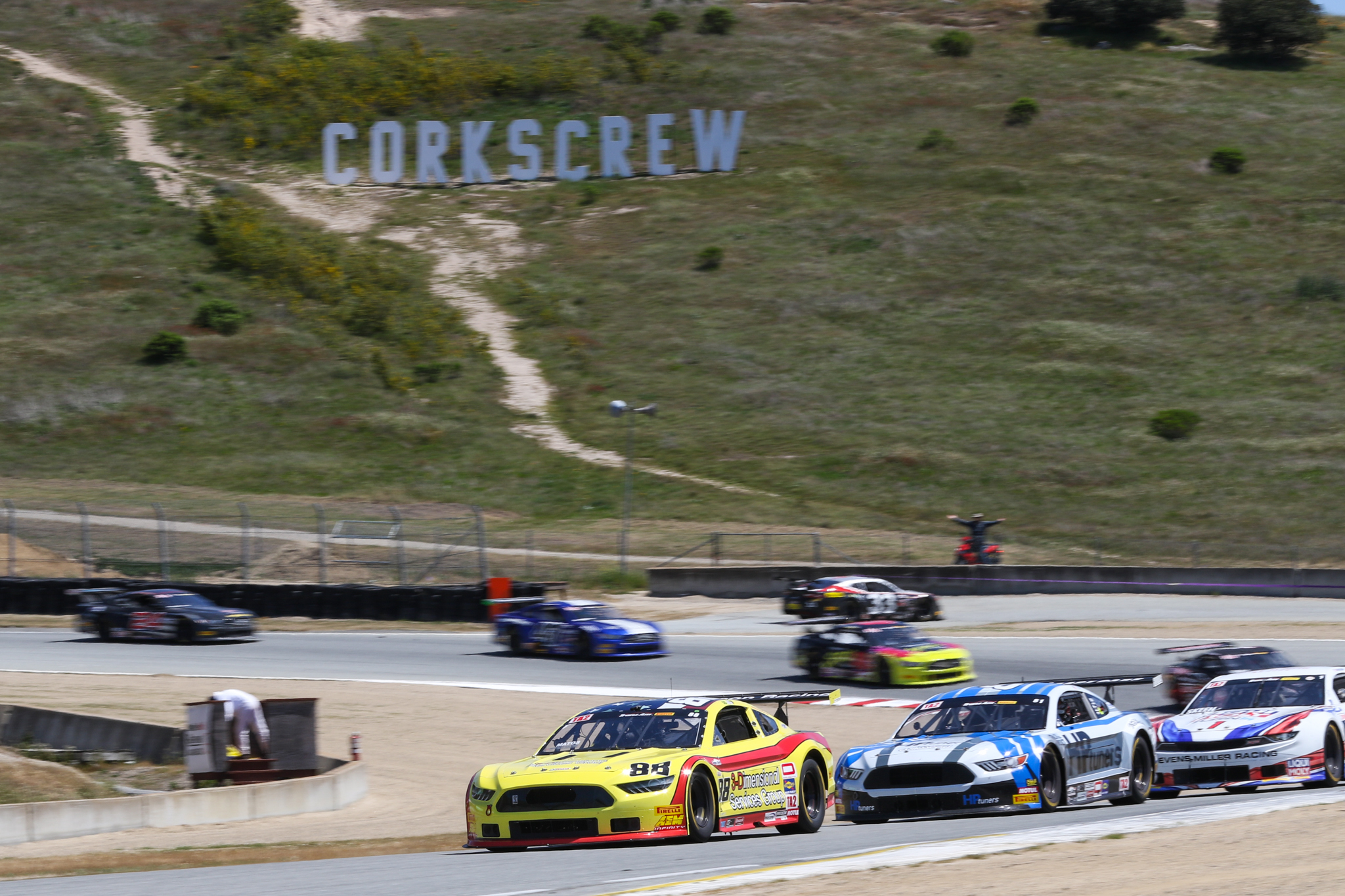 “The last five laps, the water temperature started rising and the oil temperature got to 380,” Matos said. “I started losing power, and I saw Mike Skeen catching me. So I just put my head down and I had a big enough gap. Fortunately, I saved some of my tires and I was able to push in the corners.

"I was racing against two champions out there, these guys (Skeen and Merrill) are world class drivers, I have a lot of respect for them and they raced me hard and clean," added Matos. "This is a very emotional win for us. We are honoring my cousin Mariana on the car. She passed away last month of COVID. This is my 11th Trans Am win, 10th win with Peterson Racing Group, hats off to the whole team. This is my first win at Laguna Seca, I love this place. Today was a good day."

Defending TA2® champ Skeen squeezed by Merrill in the Corkscrew in the No. 1 Liqui Moly/Turn 14 Distribution Chevrolet Camaro in the closing laps to take second,1.409-seconds back.

"We got off to a great start in this Liqui-Moly Turn 14 Distribution Camaro," said Skeen. "The Stevens-Miller Racing guys have been working really hard this weekend to make some strides to make the car go quicker. Fortunately we put the car on the pole and got some points for that. We tried to take it easy at the beginning to save the car for the end but looks like we saved just a little too much because we didn't have quite enough to catch Rafa (Matos) at the end. I'm happy to be up here, it was a good weekend for us.” 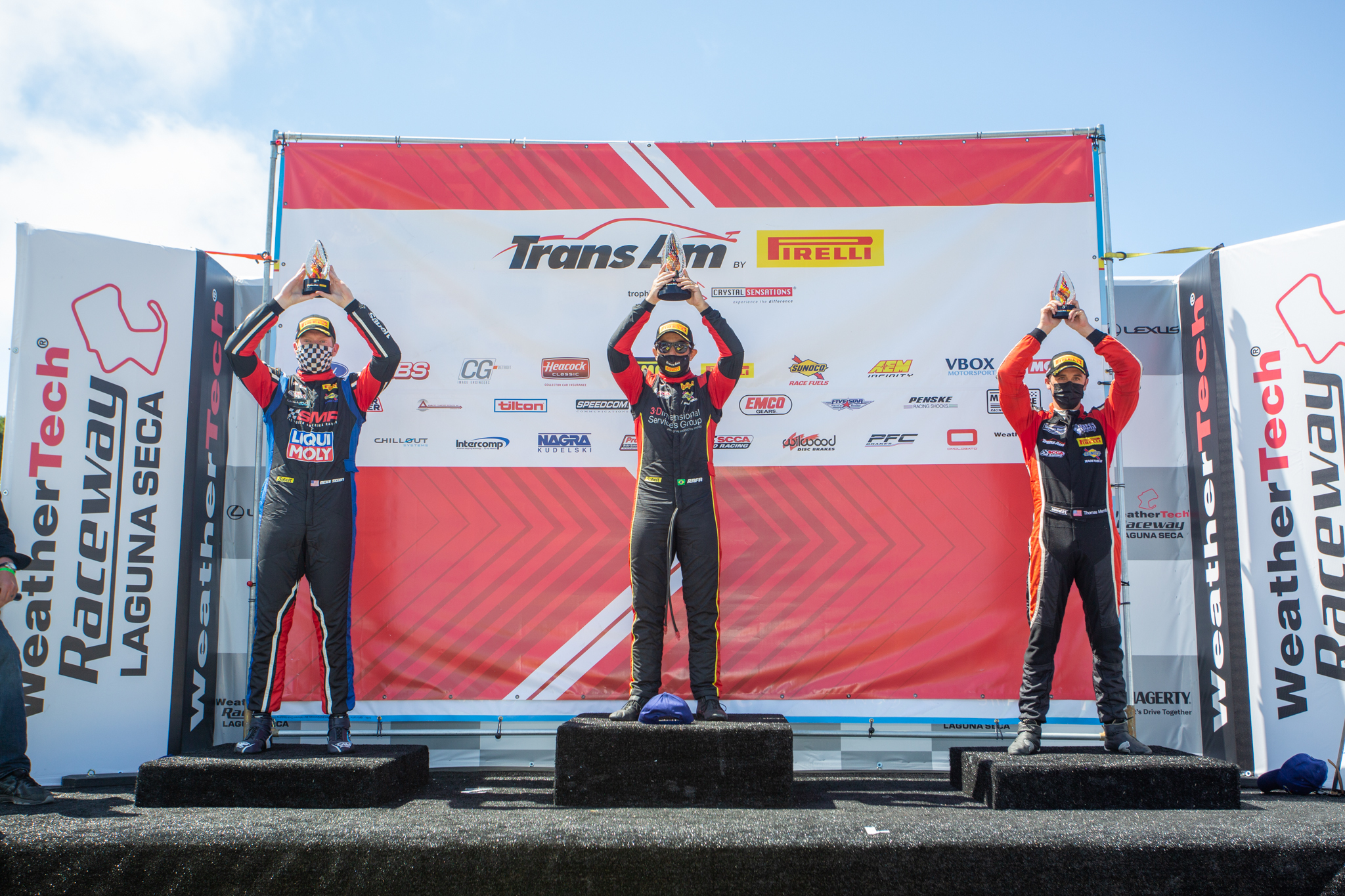 Merrill, a resident of nearby Salinas, drove from third to the lead on the opening lap, slipping past Motul Pole Award winner Skeen. He made several runs at Matos but came up short each time in the No. 81 HP Tuners/Mike Cope Race Cars Ford Mustang. With his tires starting to fade, he fell back to finish third, 8.284-seconds back.

"It feels good to race at home, especially in front of my family and friends," Merrill said. "It's always a pleasure running this Mike Cope chassis. We got off to a great start, we were cruising there and the beginning. Then these guys (Mike Skeen and Rafa Matos) turned it up a notch. They really took off at the end."

The race was slowed by three caution flags for various spins on the way to the 75-minute race time.

Ed Sevadjian backed up his impressive fourth-place qualifying run by finishing in that position in the No. 38 Big Machine Vodka Chevrolet Camaro – missing his career best finish by one position. He managed to hold off rising star Sam Mayer over the closing laps. Mayer, driving the No. 8 M1-SLR/Fields Camaro, came back from an off-course excursion exiting Turn 6 midway through the race to place fifth.

Double-duty driver Ken Thwaits took the Masters award in his TA2® debut, placing 17th overall in the No. 71 Franklin Road Apparel Dodge Challenger. He used the race in preparation for the upcoming TA2® race in Nashville. Thwaits, the 2020 XGT titlist, will also compete in Sunday’s Trans Am event. 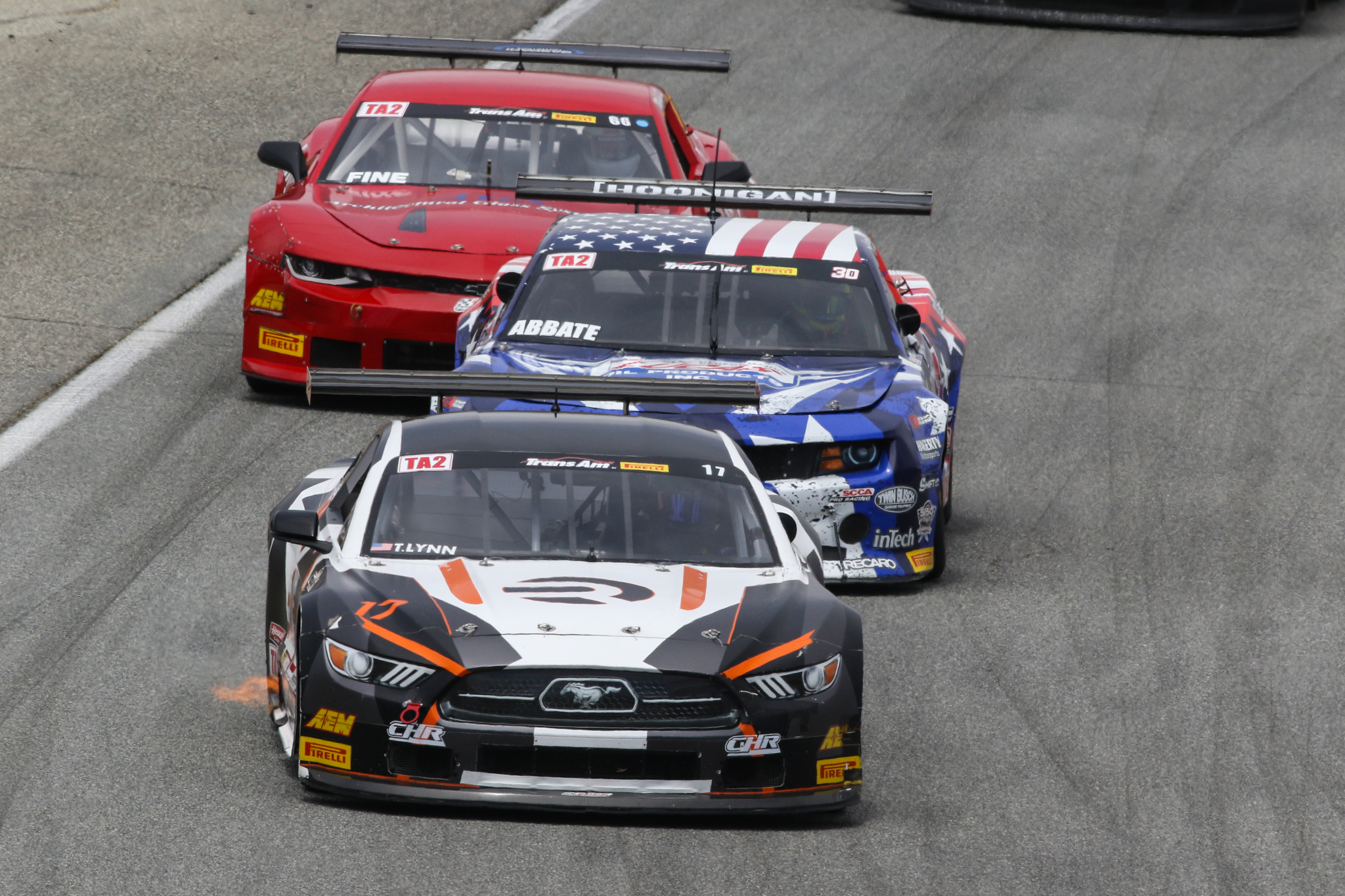 Carl Rydquist, the defending West Coast champion, dominated the class in the No. 47 Racecars4Rent/Group Wholesale Ford Mustang, but spun late in the race and finished fifth.
Connor Mosack ran with the leaders early in the race before a drive through the dirt in the Corkscrew sent the No. 28 Nic Tailor/FS M1-SLR/Fields Camaro through the pits. He returned to run with the leaders, although a lap down, and finished 23rd. 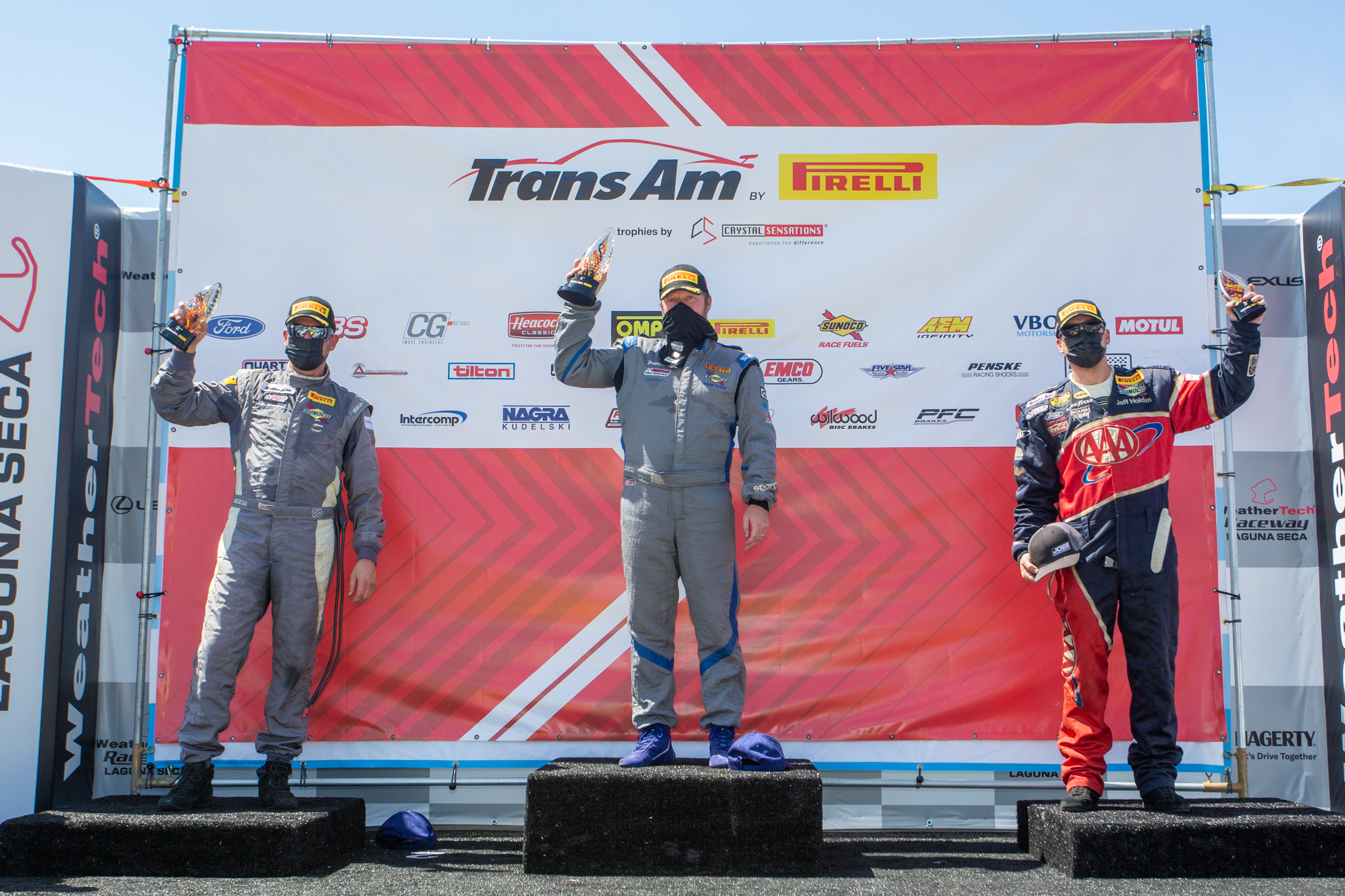 TA2® newcomer Adrian Wlostowski ran in the top 10 in the No. 3 Hawk Performance/FA.S.T. Auto Camaro before exiting with mechanical issues.

The national Trans Am Series presented by Pirelli next travels to Connecticut’s Berkshire Hills for Lime Rock Park’s traditional Memorial Day weekend. The next TA2 ® race will be at scenic Lime Rock Park as part of the traditional Memorial Day weekend, running on Monday at 1:15 p.m. ET. The TA/XGT/SGT/GT competitors race on Saturday at 1:20 p.m. ET.

The West Coast Championship will have one weekend off before returning to action at Thunderhill Raceway Park May 14-16.

*Report based on Provisional Results