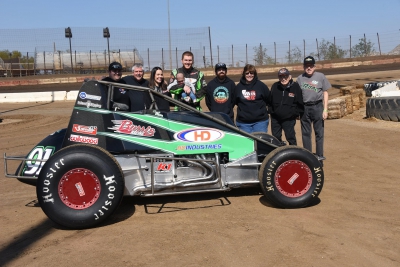 After spending last weekend with his baby daughter Addison on her first Easter, Garden Grove, California’s Brody Roa will be back in action this Saturday night in a big way at the Dave Helm Winged Sprint Car Classic at Peter Murphy’s Keller Auto Speedway.  The prestigious event will see the popular racer return to Jayson May’s #8M for the season opening USAC West Coast Series sanctioned race.  He will also make his wing racing debut in his own #91R in the Kings of Thunder 410 portion of the show.

Roa had intended to make his winged debut this year, but the decision to do it this Saturday was made on Monday night.  Plans had already been in place for him to pilot May’s Maxim Chassis, May Motorsports powered car at Hanford.  Since he was already headed that way, the BR Performance team decided to slap the wing on his familiar #91R and do double duty on Saturday.  While it will be his first ever race with a wing, it will not be his first time driving a wing car.  Over the winter, the team hauled the car to Perris Auto Speedway for a practice session with the wing in place in anticipation of doing some winged shows in 2021.

For the non-wing portion of the show, Roa is excited about teaming up with May for the first time in 2021.  The duo initially got together last Labor Day weekend in the inaugural CAS race at Central Arizona Speedway.  To say their debut was a success is an understatement!  After winning his heat race from the outside of the second row, “The Pride of Garden Grove” again started on the outside of row two, led most of the way and won the main event.  Twenty-four hours later, he started 13th in the main, and despite losing his brakes early on, he drove forward for a hard earned sixth-place finish.

Driver Brody Roa and car owner Jayson May after a win last September at Central Arizona Speedway.  May Photo.

For the 30-year-old Roa, the event will be his first at Keller Auto Speedway since a pair of races in 2018.  On April 7th of that year, he won the USAC West Coast Sprint Car Series main event.  Five months later he finished fourth in the USAC/CRA main on September 8th.

For fans wishing to attend Saturday’s race, the track is located at 801 S. 10th Avenue in Hanford and the website is https://www.racekingsspeedway.com/.

If you or your company would like to jump on board and receive recognition throughout the year, please give the two-time USAC champion racer a phone call or drop him a note at the contact information at the top of this release.  You can also contact him if you would like to put him in your car in a USAC National Series race when his west coast schedule permits.