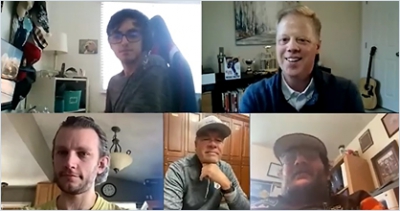 Last March, as part of National Developmental Disabilities Awareness Month, Bethesda partnered with Motor Racing Outreach to send several people supported to the NASCAR Cup Series-Auto Club 400 race in Fontana, Calif. As ambassadors of Bethesda’s mission to serve people with intellectual and developmental disabilities, they were treated to the experience of a lifetime as VIP guests. The highlight was taking a ride in the pace car with NASCAR legend and Fox Sports commentator Michael Waltrip.

Recently, Waltrip and three of the ambassadors – Jordan Flemming, Carl Riker and Chris Thompson – caught up with the NASCAR legend over an online call. Everyone was all smiles as they reminisced about that unforgettable Sunday afternoon and talked about the importance of disability awareness.

Waltrip has given many pace car rides over the years, but these stood out to him. “The smiles just seemed bigger,” said the two-time winner of the Daytona 500. “They really enjoyed the opportunity to get out on that big racetrack and see what it’s like. Sharing that with them and taking pictures, it was a day that will live in my memory forever.”

Through the efforts of Motor Racing Outreach President Billy Mauldin, NASCAR and the Auto Club Speedway opened its arms to Bethesda, providing VIP access and the opportunity to promote National Developmental Disabilities Awareness Month to the 80,000+ fans in attendance and to journalists covering the event. The Auto Club 400 was one of the final races held before COVID-19 shutdowns began.