Drissi Returns to Brainerd to Take Trans Am Top Step

Francis Jr. pulled to an 18.6-second lead in a bid for a third-consecutive triumph in 2020 while Drissi was involved in a terrific battle with Amy Ruman for second. That proved to be the fight for the win, as Francis went out with mechanical problems shortly after Drissi passed Ruman for second.

“I was patient today,” said Drissi, whose last victory was a Watkins Glen in 2018. “Burtin Racing gives me a lot of confidence. We would not be as fast without Lucas Oil Slick Mist. It’s great to be P1 at Brainerd. I am sorry that Ernie had the misfortune. It has been 10 years since I was here, and they have done a wonderful job,  it looks amazing. It was like Jed (Copham) was riding along with me in the car. I finished second last time I was here, so it is great to be on top!”

For lap after lap, Ruman in the No. 23 McNichols Company Corvette managed to hold off her long-time rival. Drissi managed to get by in the Cloverleaf Corner on the 19th lap to put the No. 8 Lucas Oil Chevrolet Camaro. Losing her power steering in the closing laps, Ruman still finished second, 46.612 seconds back. 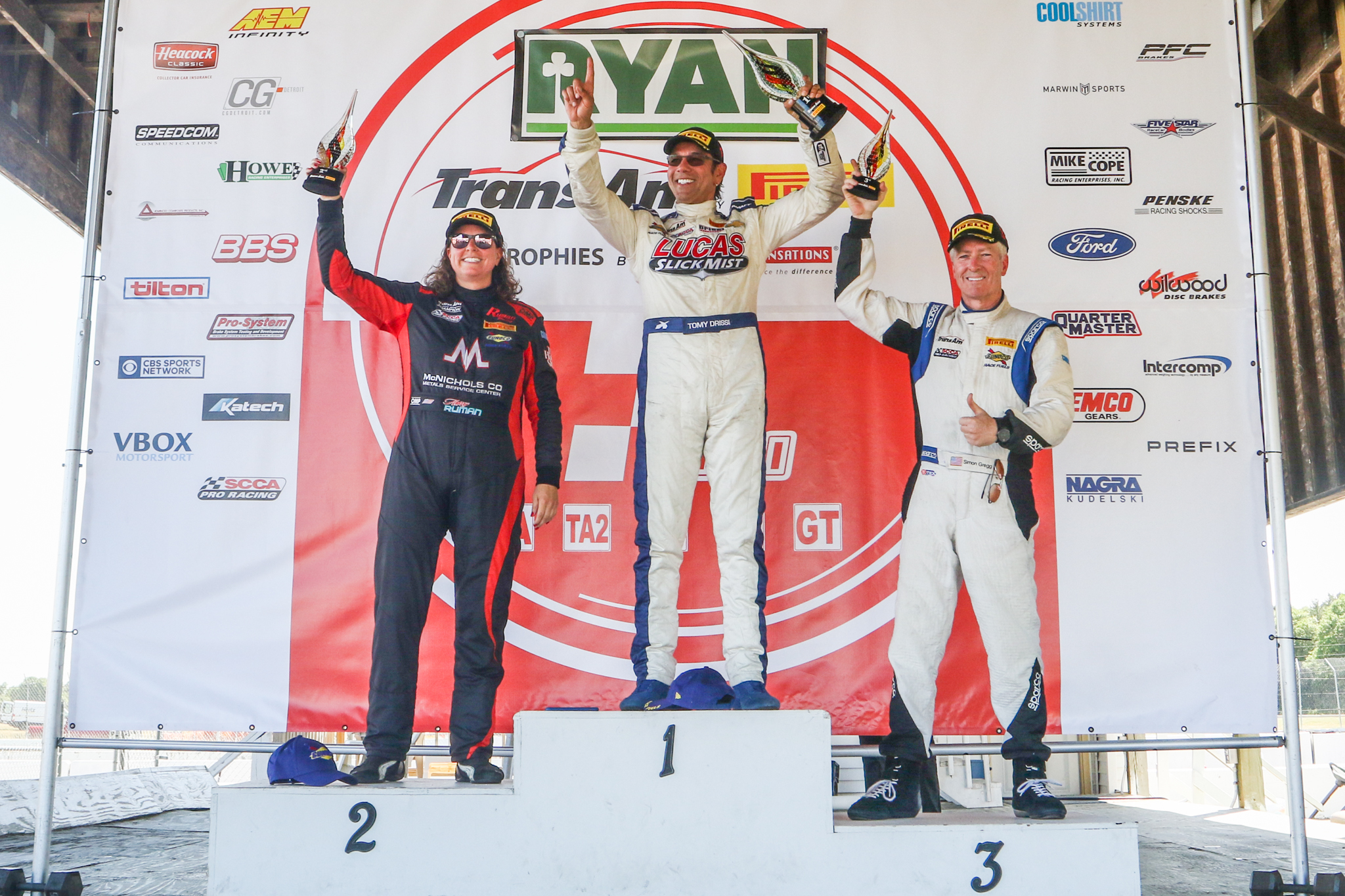 “It was a good battle with Tomy,” Ruman said. “I wish were had more mid-race and at the end. We lost power steering and a lot of grip. Giving Jed a tribute was our pleasure today.”

Moments after Drissi passed Ruman, Francis Jr. went off course twice in three corners with a problem with the No. 90 One South Florida Ford Mustang. He limped to the pits, but his day was over.

“I thought I had a tire going down, so I radioed the crew,” Francis Jr. said. “Then I knew it was the suspension as soon as I got on the brakes. I almost put it in the pit wall. But at least we showed our speed out there today.”

Simon Gregg rounded out the podium in the No. 59 Derhaag Motorsports Camaro, holding off Humaid Al Masaood by .905-seconds after the No. 21 Amamos LaVida Tequila Mustang challenged him throughout the event.

“There was a lot of pressure,” Gregg said. “The Camaro drives nice and fast. I’m glad to finish on the podium today, and I look forward to coming back here.”

Masaood’s teammate, Chris Dyson, challenged Ruman and Drissi during the opening laps, but threw the drive line on lap nine and was out of the race.

Kerry Hitt earned top honors in the Trans Am Masters Class, driving the No.19 Advanced Composite Products Inc Cadillac CTS-V. Hitt has decades of experience at Brainerd dating all the way back to 1989 racing against Trans Am racer turned Race Director Dorsey Schroeder.

Ken Thwaits led all the way in XGT, finishing fifth overall in the No. 5 Franklin Road Apparel Audi R8 GT3 Ultra. Second, two laps back and seventh overall, was Kevin Long in the team’s No. 15 Audi. 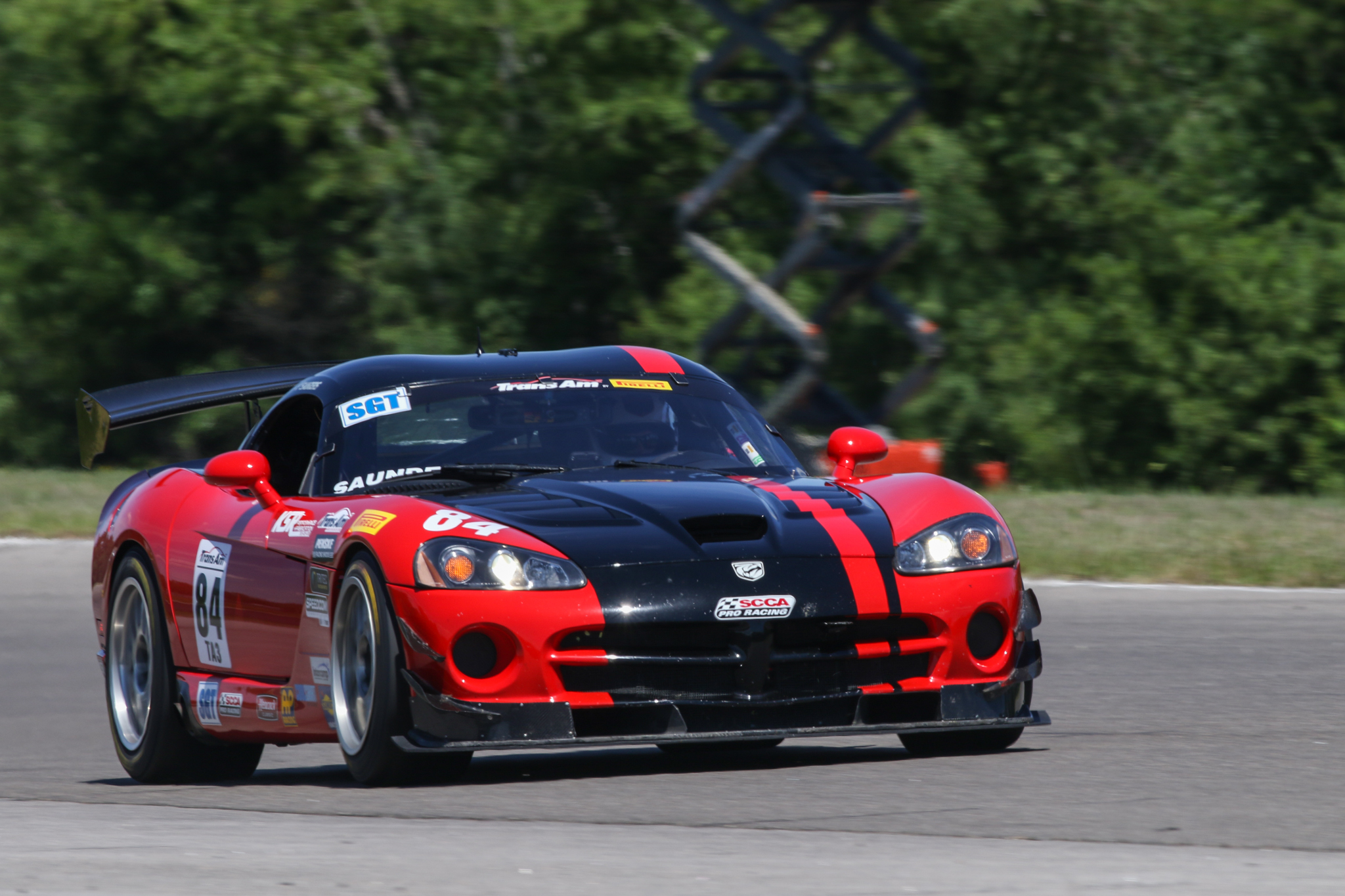 “It was kind of uneventful,” said Thwaits, winning for the first time in Trans Am. “Brainerd is a lot of fun, and the Audi loves it here. I just wanted to keep the mission – keep us off the dirty part and stay on the clean part. We showed up, and we got it done today. All the guys who missed the trip really missed out.”

Lee Saunders took the checkered flag in SGT, winning his second race of the year in the Sebring-winning No. 84 Landsearch LLC Dodge Viper.

“At the start, Aaron was really pushing us, and raced us super clean,” said Saunders following his 10th career victory. “We came here with a car with problems, but the crew got it sorted out and got us up here.”

After breaking his harmonic balancer on his No. 96 F.A.S.T. Auto Ford Mustang during Thursday testing – and not having a spare – Adrian Wlostowski’s crew hustled his GT-1 Corvette 800 miles from New York City.

The F.A.S.T Auto Racing adapted the cars to SGT specs on Sunday morning. The work was worthwhile. Wlostowski came home second, matching his career-best finish from the most recent race at Mid-Ohio. Running without a cooling system, Wlostowski was rewarded for his efforts with the Cool Shirt Cool Move of the Race Award. 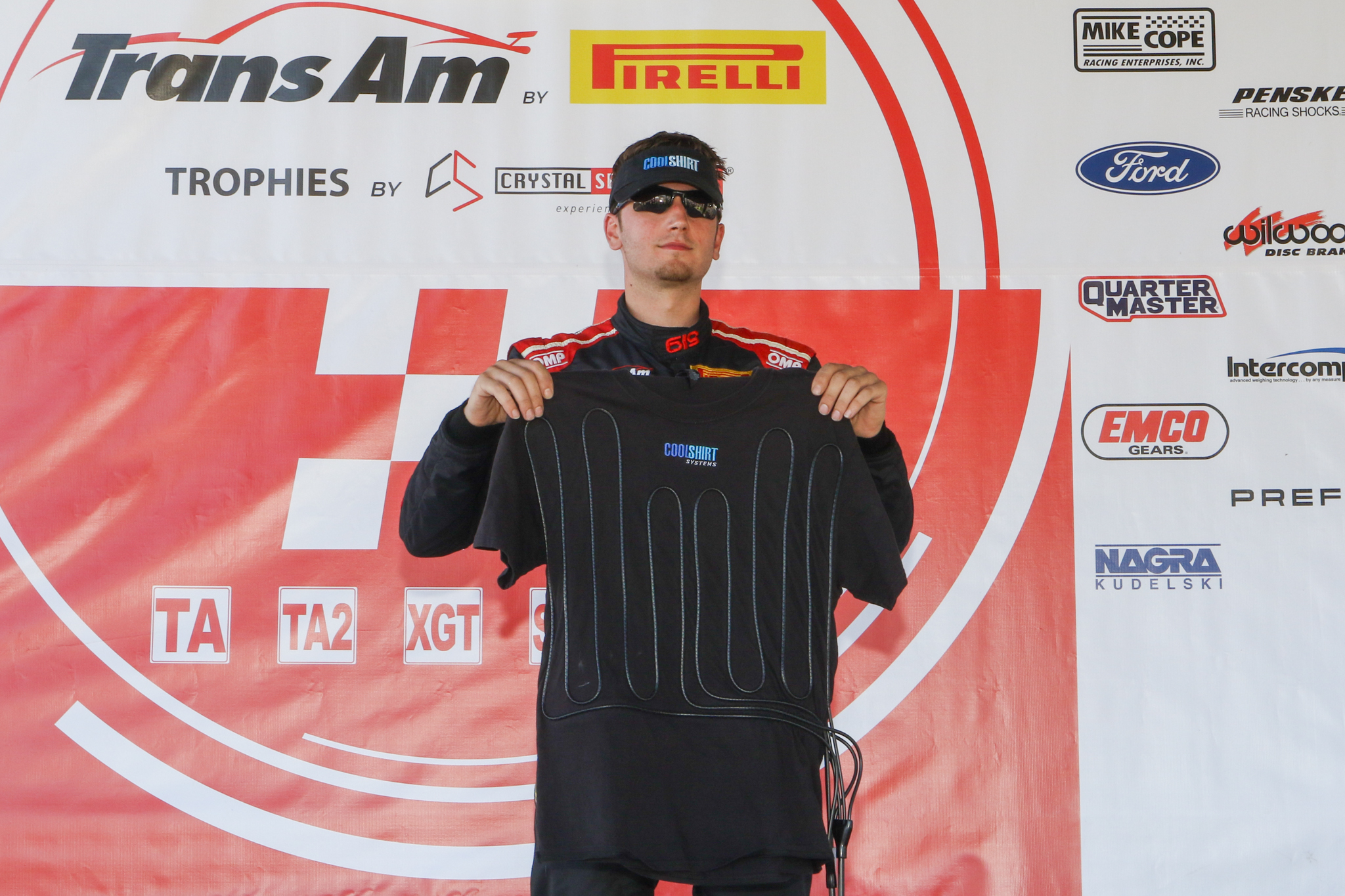 Aaron Pierce rounded out the SGT podium in the No. 26 Logical Systems/Sam Pierce Chevrolet Camaro.

Next up for  Trans Am Series presented by Pirelli will be a return to Road America on August 6-8 with the NASCAR Xfinity Series.