Trevor Bayne started second and led 21 laps early, before making contact with the outside wall on lap 88 after getting hit by the No. 32. Still, the team furiously battled back to a top-five finish.

“These guys never got down on me all day,” said Bayne. “They built me a racecar that should be sitting in victory lane, but still we are sitting here in fourth and I’m so thankful to have racecars that are so fast. These guys never gave up and we got the World Financial Ford back inside the top-five.”

Pastrana started the race 31st after rain forced the cancellation of Friday’s qualifying. Exhibiting the poise of a veteran, he patiently maneuvered his way through the field for his second top-10 finish in three races in 2013.

RFR and the Sprint Cup Series return to action for tomorrow’s 400-mile Sprint Cup event. The race is set for 3:00 p.m. EDT and will be televised live on FOX. 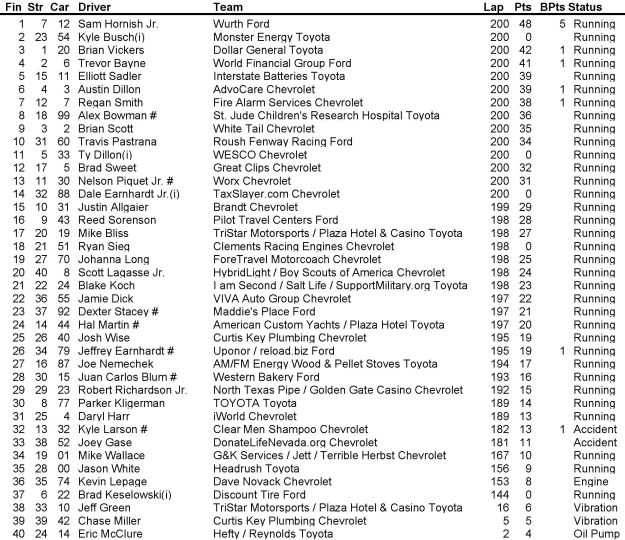 Las Vegas turned out to be a fitting place for the Motorcraft/Quick Lane team to have a little luck at the race track.

With qualifying and practice for the Kobalt Tools 400 at Las Vegas Motor Speedway rained out on Friday, the starting line-up was set by last year’s owners points, and since the Wood Brothers team wound up 36th in the 2012 standings despite running a limited schedule, Trevor Bayne will line up 36th on Sunday.

If that washout had come at Texas Motor Speedway, the next scheduled event for the team, the Woods’ limited schedule could lead to all the available starting spots going to teams running the full schedule, which includes two races they are not entering.

“I’m glad we’re getting to race on Sunday instead of loading up and going home,” team owner Eddie Wood said. “But even if we fall victim to the weather somewhere down the road, we’ll just add another race to make up for it.”

Despite the lack of practice and qualifying on Friday, Wood and the Motorcraft/Quick Lane team feel they’ll be well prepared for Sunday’s race, thanks to a rare Thursday test session at Las Vegas.

Bayne and his Motocraft/Quick Lane Ford Fusion were 14th fastest in the second practice session on Thursday, and Wood feels that the lessons learned with their back-up Ford Fusion will transfer to the primary car, which is now in race trim and ready to hit the track for race practice on Saturday morning.

“We’re happy with what we had in practice,” Wood said.

Two brief practice sessions are set for Saturday, at noon and 2:35 p.m. eastern time, and

The Kobalt Tools 400 is scheduled to get the green flag just after 2:30 p.m. Eastern with TV coverage on FOX.

Last month, Win-Tron Racing and the 2012 ARCA Midwest Tour Rookie of the Year, Matt Tifft, officially announced that they would unite and run for the championship with their No. 89 Chevrolet Impala under the leadership of Shane Tesch. The addition of DOC 360 completes the puzzle and allows the team to centrally focus on winning races and ultimately the championship.

"DOC 360 is very excited to partner with Matt Tifft and Win-Tron Racing,” said Tim
Preston, Director of Business Development for DOC 360. “Matt is a perfect fit for the DOC 360 brand as both are rising stars in their respective business. When you speak to individuals from the racing community, they all speak very highly of Matt as a young man and his future in racing. We feel he will connect well with our core demographics and be a great representative for the DOC 360 brand as we move toward national distribution. Most importantly, we feel the Win-Tron Racing and the DOC 360 partnership can help Matt reach his goal of a NASCAR Sprint Cup Series championship someday."

“I’m very excited to be representing DOC 360 on the NASCAR K&N Pro Series East Tour this season,” he said. “It’s great to welcome a new sponsor into Motorsports and I feel the partnership will be very rewarding. We cannot wait to get the season started next weekend at Bristol.”

Green Earth Technologies' G-CLEAN® brand celebrated its entry into the family of official NASCAR Green partners in a wide-ranging series of activities during the recent Daytona Speedweeks.

Green Earth Technologies, Inc. (GET) (OTC Bulletin Board: GETG) a totally "green" tech company, is the maker of G-CLEAN products. G-CLEAN products are DfE (Designed for the Environment) certified.

"NASCAR fans are becoming increasingly aware of Green products and they have a long history of supporting NASCAR sponsors," said Jeffrey Loch, President and CMO of GET.

According to NASCAR research, its millions of fans are twice as likely to embrace green compared to non-fans, and are far more likely to view their household as very green and always looking for ways to positively impact the environment.

"The NASCAR Green sponsorship opportunities provide GET with both increased consumer awareness and valuable B2B opportunities," said Jeffrey Loch. "We look forward to building on those relationships both with consumers and in the marketplace." 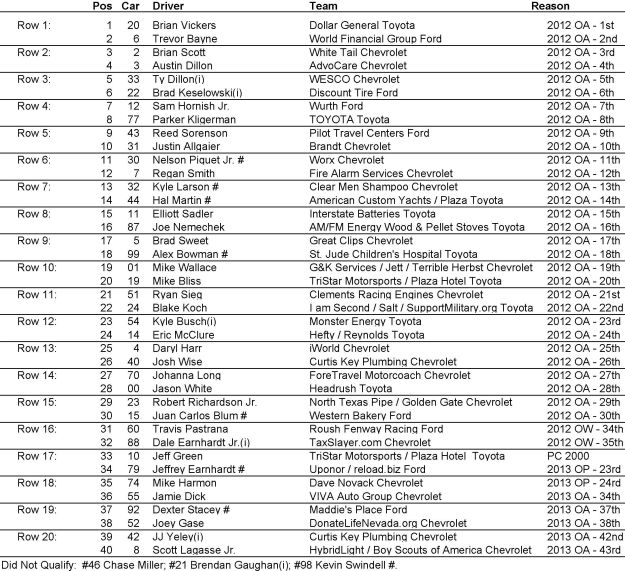 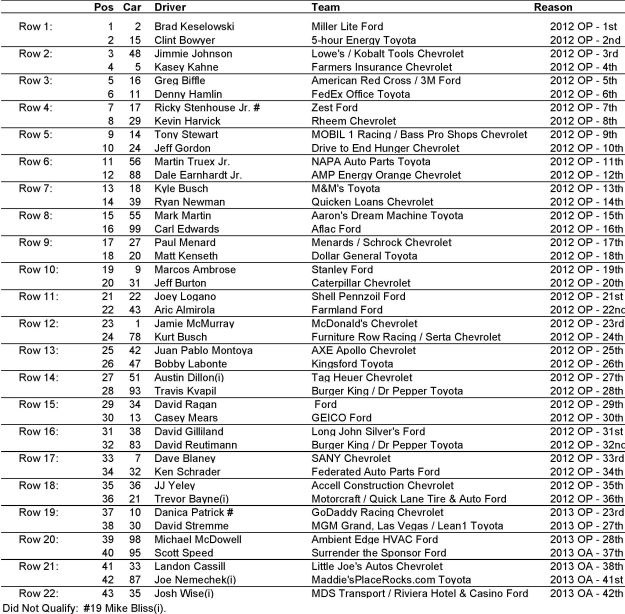 “This is going to be a big year for me, moving into late models. It will be a good opportunity to learn and grow as a driver. I’m really excited to compete for Rev Racing and thankful for the opportunity to be a part of the Drive for Diversity program.” said Barnes.

Madrid, originally from San Clemente, Calif., spent last season racing in the Super Late Model Division on the West Coast, where he finished in the top-10 in all four races in which he competed.

“The biggest difference for me this season will be the level of talent at the track, it’s really going to help me develop as a driver. I feel like we have a really great Toyota Camry that will be competitive, and my goal is to learn as much as I can each weekend.” said Madrid.

Barnes and Madrid both join the NASCAR Drive for Diversity program this season after being selected in the combine to compete for Rev Racing in the NASCAR Whelen All-American Series.

A new turn-key hospitality option is available for race fans wanting a VIP experience when they attend either the NASCAR Nationwide Series 200 on May 10 or the Bojangles’ Southern 500 on May 11 at Darlington Raceway.

The Champions Club, housed in the former President’s Suite in turn 3 of the Darlington infield, provides an all-inclusive experience for fans.

“We’re always looking to create other hospitality options that give our fans a VIP experience and the Champions Club is definitely a great option,” Darlington director of corporate sales Jeff Taylor said. “All the amenities you receive with this package will really make fans a VIP at Darlington Raceway.”

The Champions Club features a 360-degree view of the track. The oversized deck provides a casual, fun experience where fans can socialize while watching the race trackside. A version of the Champions Club was introduced in 2012 and because of its popularity was brought back with more amenities and now includes Friday in 2013.

To order Champions Club packages, fans may call the Darlington ticket office at 843-395-8802.

When Carl Edwards powered his 2013 NASCAR Sprint Cup Series Ford Fusion to Victory Lane on Sunday, Ford Motor Company took home its historic first win with the Gen-6 car. Today, the auto manufacturer captured yet another honor when it was named recipient of the 2012 NASCAR Driving Business Award.

NASCAR presented Ford the award at a ceremony in Las Vegas during the NASCAR Fuel for Business (NFFB) Council. The annual award is bestowed upon the Official NASCAR Partner that demonstrates extraordinary leadership and results through its participation in the NFFB Council. With its win, Ford becomes the first two-time recipient of the Driving Business Award.

The NFFB Council brings together an exclusive group of more than 55 Official NASCAR Partners to get more out of their sponsorships, specifically aligning partners four times a year to buy and sell products and services. This environment offers the unique opportunity for many Fortune 500 companies to bypass the time and layers of corporate coordination that may exist and construct customized deals to help address specific business needs.

Ford Motor Company, which has been competing in NASCAR since 1949, has been a proud member of the NFFB Council since 2007. The company brings key personnel from across its organization and matches them up with their counterparts at other NFFB companies during the Council’s signature Speed Meetings. Most notable is Ford’s effort to sell vehicles to other NFFB members through its Partner Recognition Program.

As a result of Ford’s participation in the Council in 2012, Ford forged a number of business-to-business alliances with Official NASCAR Partners, resulting in highly visible partnerships and a number of programs that were successful in “Driving Business.” Through an advanced customer database, the company directly attributes vehicle sales and lead generation to NASCAR Official Partner assets. According to Ford’s data:

·         In 2012, Ford sold more than 5,500 vehicles to NASCAR Official Partners through its “Partner Recognition Program,” with one of its largest vehicle sales deals being worth more than $5 million

“Winning the ‘Driving Business Award’ for the second time in the past three years is a direct reflection of Tim Duerr, our motorsports marketing manager’s dedication to the NASCAR Fuel for Business Council and the value it provides to our brand,” said Jamie Allison, director, Ford Racing. “As a proud member of the Council, we are continuously developing new strategies to drive business and this platform has proven to be a particularly effective tool in generating positive return on investment.”

“Ford continues to be among the top blue chip brands that are building business within the NASCAR Fuel For Business Council,” said Norris Scott, NASCAR vice president of partnership marketing. “A model B-to-B partner in NASCAR, Ford continues to be a leader in developing strategic ways to generate business from its sponsorship.”

Since the NFFB’s 2004 inception, the Council has facilitated hundreds of millions of dollars in annual revenue and savings to its participating members.