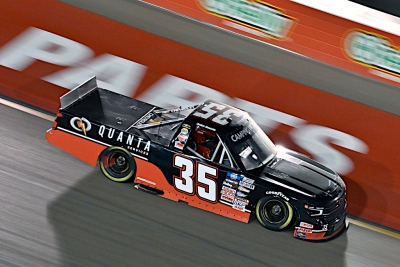 McAnally-Hilgemann Racing wrapped up the NASCAR Camping World Truck Series 2022 season with a solid showing in the Lucas Oil 150 at Phoenix Raceway on Friday.

Derek Kraus led the way among the three MHR drivers, driving a backup truck from the back of the pack to finish 11th in his No. NAPA AutoCare Chevrolet Silverado. His team had to go to their backup after Kraus tangled with the wall during practice on Thursday.

Kraus turned his first laps in the backup truck in qualifying on Friday. He had been eighth quickest in practice on Thursday prior to getting into the wall and going to a backup, which required he drop to the rear for the start of the race. Nonetheless, he charged to the front – getting as high as ninth late in the event. He got shuffled back a couple of spots on the final restart, however, as the race went into overtime.

Howard started 16th and despite handling issues, was able to finish 15th. Garcia started 17th and had a solid night – running as high as 11th, before slipping back in a couple of late restarts to finish 16th.

MHR hosted several special groups at the track on Friday. They included 30 guests from the NAPA Phoenix Distribution Center – along with 20 guests from NAPA Tools & Equipment, which had held a sales blitz geared around the race. Tony Smith of BBB Industries also brought a group of NAPA customers to the event. Guests received a VIP experience – including a pit tour and transporter tour, a meet-and-greet with the drivers and access to pit lane with the team for pre-race ceremonies. Four VIP guest crew members had the chance to sit on top of the NAPA pit box for the race.

“I kind of messed up in practice and put our team behind a little bit, but they brought a pretty good backup truck that we were able to get into the top 10 there for a little bit. We were able to get in the top 10, but it just kind of lost a little bit there at the end. It got really loose on the bottom. Overall, it’s good to bring out  a backup and show speed. Hopefully, we can come in and do this again next year.”

“I was good for about five laps and then after that we just struggled with everything the entire night. Nothing went our way and nothing seemed to fix it. It just wasn’t a good night.”

“We had a fast Chevy Silverado and we were able to gain ground and move our way up. We were going for it. I learned a lot tonight. I appreciate all the hard work by the MHR team and thank Bill McAnally for this opportunity.”