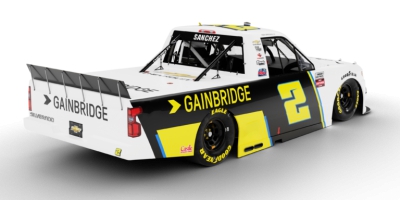 Rev Racing announced today they will be expanding into the National Series in 2023, fielding a full-time ride in the NASCAR Craftsman Truck Series with its technical alliance partner, Kyle Busch Motorsports (KBM). Nick Sanchez, recent 2022 ARCA Menards Series Champion, will pilot the No. 2 Gainbridge Chevrolet for Rev Racing and owners Max and Jennifer Siegel.

Over the last 20 years, Siegel has made tremendous strides to increase diversity in racing by offering opportunities to women and minorities, including over 125 drivers, over 100 pit crew members, and more than 20 interns and young professionals.

This expansion into the National Series offers yet another platform and pipeline for young drivers to advance to the highest levels of the sport.

Rev Racing has had a collective 26 wins, 119 top 5s, and 232 top 10 finishes in the NASCAR K&N Pro Series/ARCA Menards Series, with drivers finishing in the top 10 in points in every season. Rev Racing holds two Championship titles in the NASCAR K&N Pro Series East/ARCA Menards Series, with Kyle Larson in 2012 and most recently with Nick Sanchez in 2022.

“This is a pivotal moment for our organization,” said Rev Racing owner Max Siegel. “With our unwavering focus on a commitment to diversify the sport while putting a model in place to train and prepare drivers for the next level of competition, and because of our strategic partnership with Gainbridge announced earlier this year, we have never been more prepared for this next stage of advancement. Working with our technical partners at KBM and Chevrolet, we know Rev Racing and Nick are positioned for competitive excellence.”

With Rev Racing capturing the 2022 AMS Drivers Championship and KBM standing as one of the most-winningest teams in the Truck Series, the partnership was an optimal choice for continued success as collaborators. Both teams are exploring opportunities to expand competitive alliances with Rev Racing’s ARCA program as well.

“Unofficially we’ve been a part of helping former Rev Racing drivers take the next step in their NASCAR careers in the Truck Series, with Bubba Wallace and Daniel Suárez both getting victories in a KBM truck, so we’re looking forward to aligning with Max, Jennifer and everyone at Rev Racing to now officially be a part of the pipeline for young drivers in their diversity program to continue to advance into the National Series of NASCAR,” said Kyle Busch. “Nick is an impressive young driver, winning the ARCA title this year and has had some solid runs in the Xfinity Series as well, so we’re looking forward to having him be the trendsetter of what we’re confident will be a successful program for many years to come.”

Sanchez has spent five years competing with Rev Racing as a participant of the NASCAR Drive for Diversity Driver Development Program. He has earned an impressive 31 top 10s, 18 top 5s and 4 wins in his collective AMS career. He ended his rookie 2021 AMS season with a win at Kansas Speedway and 3rd in point standings and finished the 2022 AMS season with victories at Kansas, Talladega and Michigan and the Championship title. Sanchez has seen success in every level of competition he has participated in, which made him the optimal choice for the dedicated seat.

“I’m very excited to continue driving for Max and Rev Racing in the Truck Series in 2023,” said Nick Sanchez.” To be able to join forces with our technical partner, KBM, is a great opportunity for me to learn how to win on a regular basis. Continuing my relationship with Chevrolet and Gainbridge is something that I value greatly and this is seemingly another step in our long-term plan/goal.”

Gainbridge became a partner of Rev Racing this season, and is fully committed to the Rev Racing/Diversity Program and supporting the next-generation drivers, like Nick Sanchez, to drive more diversity into the field of motorsports. Both groups saw immediate alignment in their shared mission and focused-initiatives within the sport and beyond.

“We’re proud to support Nick Sanchez and watch him compete in the more advanced racing series. His tremendous progress is a prime example of how Rev Racing’s Drive for Diversity Program has elevated talented race car drivers,’’ said Dan Towriss, CEO and President of Group 1001, the parent company of Gainbridge. “We are committed to providing ongoing support for the next generation of drivers and driving more diversity into the field of motorsports.’’

The Rev Racing No. 2 Gainbridge Chevrolet will make its National Series debut in the NASCAR Craftsman Truck Series with Nick Sanchez at Daytona International Speedway on February 17, 2023.