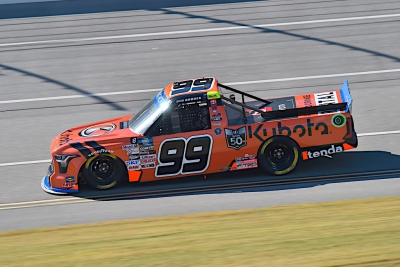 How are you able to reset for this championship run after having a rocky season to get to this point?

“I believe this is a quote from Senna and I’m going to paraphrase a little bit, but the road to greatness is always rough. So it doesn’t bother me at all and I’m happy to be back in the Championship 4 and the fact that ThorSport Racing is in there with two trucks. Pretty good with 50% chance of winning to bring it back to the team. I want the 100% chance of Ben Rhodes. I’m not going to lose sleep though if my teammate wins it and I feel like just getting it back to ThorSport is going to be good. Just happy to be here honestly.”

What are your chances to win the championship tomorrow night?

“I think pretty good honestly. I’ve told people that I think Ty (Majeski) is the favorite, but I don’t count myself out at all. Our team just performs when it needs to and we’ve done that. I mean, getting here is not a small feat. There’s a lot of really good trucks that are not here today and I think that speaks to the competition of the Truck Series nowadays. It’s pretty tough, really tough actually. I would say just as tough as last year, maybe tougher. I think that getting here is a challenge and it’s almost a victory in and of itself. But now that you’re in it, it would be a total defeat not to win the championship. Getting here is one thing, but then not capitalizing on the opportunity would just suck. We’re going to do everything we can tomorrow. I’m not going to say, checkers or wreckers, but we’re going to go out and make sure we get the victory. If we don’t, it doesn’t mean the year has been a failure, but it would feel that way to me personally in some ways.”

Are you surprised as the defending champion that you’re the longshot for this title?

“I don’t care. Honestly, I think we were the longshot last year too. I guess that’s just what we do. Everybody has me being the longshot. I don’t know, I guess some of that might come from stats and I’m sure it does. I don’t care. I think we’re going to rise to the occasion just like we did last year and just like we did to get ourselves in this position. I was telling somebody earlier today that it feels like every season we’re in the Playoffs, I can think of only one season when we were able to coast through to the next round. But for the most part, it’s just fighting tooth and nail just to get ourselves into that spot to transfer. It’s like, here’s the tiebreaker, here’s one point, here’s four points and it’s not easy to do that. It’s very easy to make mistakes in high pressure situations like that so I think the fact that we’ve already had to be forged in fire has given us a little bit of an advantage so kind of like we’ve been here, done that. I’m not going to say that one year is the same as the next because it’s definitely not. You’ve got Ty (Majeski) who’s won two of the last three races and Chandler (Smith) won this race last year. I don’t know that you have to win the race, but you’re going to have to run up front. Maybe these other guys will make mistakes, but I’m counting on them not to.”

After winning the championship last year, does it make you that much hungrier to win it again this year?

“So I believe there is a cup called the Pythagoras cup, but it’s a cup from ancient times that when you would fill it up and the cup gets full, it would drain itself back out. That’s kind of what the championship felt like last year. We won it, I’ve never experienced such emotion and raw happiness in racing before. It felt like it was so long to get to this point and now I feel like I can’t live without out. And now my cup is empty again. I’ve got to fill it and it’s kind of like an addiction and I’ve got to make it happen. Once you get it, again you can’t live without it. Six years in the making to get to that championship and to go back to back would be really special. I can’t believe that my teammate, Matt Crafton, was the only one to do that. It would be nice to join him. He’s probably getting lonely.”

What is the biggest hurdle you will have to overcome to win this championship?

“Here’s the thing, I know all these guys are going to have crazy, raw speed off the hauler. We have to do that too. That’s like the first step. If we can hit that first step and not stumble, just raw speed right off the truck then we’re on our way. I really believe that, but if you don’t have the raw speed off the hauler, trying to change a package in 50 minutes worth of practice and pulling from your teammates makes it very interesting day for sure. We done that before and you can have success doing that, but it makes your odds very slim. So speed off the hauler, it sounds simple, but it’s a game changer and all these guys are going to have it so we have to have it too.”

How much do you know about the setup in Ty Majeski’s truck?

“A fair amount. At ThorSport Racing, we share everything and we do simulator together. I will say that they have worked on their own package and they’re very specialized in their own package this year. Our other teammates are not running what they have. I’ll say that each crew chief and each team really focus on what their strengths are. They’ve got a really good package and they worked on sim for a long time and they’re the best team at working on the sim and they spend the most time on it so naturally that suits them. We’re kind of on our own program, but if we don’t have the speed that we want off the hauler then we can abort mission and change to something our teammates are running. There’s a big effort there from ThorSport to make sure that we’re all running something different so we find the one thing that’s best and we’ll make that happen.”

What is your team’s strong suit?

“My strong point, I think our strong point is saving tires actually. Last year that was what came in clutch for us at the end of that race. That long green flag run, everybody else wore it out and we were able to catch back up to them and pass them. If a yellow flag would have come out, I don’t know if we had the short run speed to pull it off. We are trying to keep that strong point intact  of long run speed, but fire off better. There’s some stuff we’re doing underneath the truck, suspension-wise, to try to make that happen. Not changing the package up completely, we’re similar to last year, but I think we found some improvements over the season to make that happen.”

Is having a championship already an advantage to you over the other three drivers?

“Not necessarily on the track an advantage, on the track it’s just raw speed from the race truck itself. No advantage there. Maybe there’s a mental advantage with the fact that we’ve been here, done that. Will we make mistakes? I sure hope not. We strive every race not to do that. We know the pressure, we’re performed in the pressure before so I hope the pressure catches the other guys off guard. We can just settle in and do what we do.”

How is your approach different this season?

“I think our approach this year is actually we’re bringing a very similar package from last year, but we made a lot of changes to it and we think or we know should be better. Then from that point forward, we go into practice, and we feel it out and if it’s not right, we can abort mission and rely on our teammates. We have that privilege; we have four awesome guys that are out there trying different things and we can rely on them to elevate our program if it’s not right. For the most part, the program worked out well last year so we’re going to rely on the same.”

Where would you assess where your team is currently from a performance perspective?

“Upward trajectory. It was here and then it went to here and now it’s going back up. Talladega we got a ton of points, we did everything we needed to do. Brand new truck for that track. Homestead, we went back to a similar setup that we had for Vegas, which I told my crew chief that it was one of the best trucks I’d had at Vegas before my teammate Ty was jealous and wrecked me – kidding, just joking. Duke (Thorson, team owner) told me the other day that my teammate didn’t appreciate my speed. We make fun of everything and we joke around a lot on our program. But that was a really good race for us and we pulled a lot from that. We added that back to the program for Homestead and it worked out well for us. Led a bunch of laps at the start of the race and wasn’t ideal, wasn’t the best, but we’re on an upward trajectory and that’s what matters. Phoenix went really well for us last year and we had good speed. The resin that they’re not putting down could be an advantage for us, but I don’t know until practice starts. We’ll have to see.”

Who is your biggest competition for the championship?

“The 18 (Chandler Smith) is going to be tough as long as they don’t overcomplicate things and they pull from their playbook last year, they should be fairly consistent to what they were last year and they were really, really fast. The 66 (Ty Majeski) is going to be really fast because this track is kind of in their wheelhouse. You can look at certain tracks that certain teams can hit their setups on right, this is a track that the 66 is in their wheelhouse, the 18 is in their wheelhouse. I’m not sure about the 38 (Zane Smith), I know we’re in a good spot and we’ll pulling from last year and made a lot of good adjustments. I think those two are the trucks I’m going to be watching for, but Zane Smith is an excellent driver and has experience here in this situation and I don’t think he’ll falter. He’ll rise to the situation.”