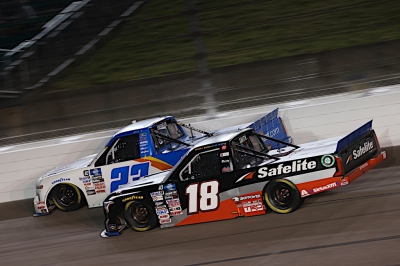 Kyle Busch Motorsports driver Chandler Smith was made available to media at Championship 4 Media Day on Thursday in Phoenix:

Are you expecting help from your teammates this weekend?

“I mean it helps. It’s not easy racing your teammates for a championship. It’s never easy. I’ve never been in this position, but it doesn’t take a rocket scientist to figure out – if you have to go wreck your best friend for a championship, is that going to be an easy conversation after? It definitely helps myself, but as an organization, we would want the 4 truck to make it, but he didn’t, and I feel for those guys. We were in that same role last year, but I know I could rely on him if I needed to.”

What will you take away most from your time at Kyle Busch Motorsports?

“Just the people here. I’ve made so many good memories with these people and learned so much. I’ve made so many good lifetime long friends in this organization. They have taught me so much. They are the ones that introduced me to the NASCAR world and helped me learn the ropes. I’ll forever be grateful for all of the opportunities that were available for me.”

What would it mean for you to win this final race for Kyle Busch Motorsports?

“It would be amazing. Trusting the process – a whole two years from being at the bottom and kind of stairsteps to the top a little bit and that was just by faith. If that is what the case is tomorrow, what a testimony. That’s what having faith in the Lord – that’s the outcome. That alone would mean more to me than winning the championship – being a testimony and an example.”

Any extra pressure to deliver a championship this weekend?

What are your expectations for this weekend?

“Whatever the books are saying I guess are my chances. I don’t know. We are just going and treating it like every other race. It’s just another weekend where we have to go and perform.”

What are some of your favorite moments as a Kyle Busch Motorsports driver?

“All of the memories and the great people that I have met that have come and gone. I’ve learned so much from all of these great people at KBM (Kyle Busch Motorsports). They’ve taught me a lot about life lessons, racing lessons, whatever it may be. I think that is the biggest thing that will stick out to me.”

What do you think is the biggest hurdle for you to overcome this weekend?

“It’s just another race. I don’t see the pressure being added because I’m just treating this like any other weekend and there is a bigger prize to be had in victory lane if we were to get it.”

How do you decompress away from the Playoffs?

“At the end of the day, I was hired to go race cars for a living for them and that is what I do week-in and week-out.”

How do you balance being a new father with everything that you have going on right now?

How have you had to adjust to fatherhood?

“There is a little more work around the house. It’s just another individual that you have to tend to and that’s not bad at all. I’m just being honest with you – there is another person in the house now, that rely on you and all of that. There’s really not much adjusting. There is a lot that comes with – but it’s not like it was a really big swing and I wouldn’t recommend it.”

What would you say is a defining moment for you this season?
“I’ve got three wins. We probably should have five or six. Should’ve been our count, but circumstances did line up or whatever it may have been, but I feel just like the raw speed week-in and week-out. We have the consistency. I don’t know if I would say we are a championship caliber team – I don’t know what defines a championship caliber team. It is being mistake-less. We are human, we are going to make mistakes. I would just say that we have been consistent, and it has paid us dividends.”

Are you excited that the championship race is at Phoenix knowing your previous success here?

“Yes and no. As crazy as this sounds, but it is reality, these trucks – I can’t control what goes on other than I drive race cars. I drive them. I can’t control if bolt gets less loose leaving the race shop and we go into turn one at Phoenix and we stuff it in the fence. I can’t control that and that can dictate the rest of the weekend. I know we should have a fast truck, but I wouldn’t say it necessarily – if we get to Phoenix, we are going to win. Definitely not. There are way too many variables in making everything go full circle than just that.”

What are the emotions having your last race with Toyota?

“Bittersweet, because they have done so much for me. I’ve been a TRD driver for six plus years now. They have gotten me to where I am and have supported me in everything – my highs and lows, for sure. They have been really supportive, but I got the opportunity of a lifetime that I couldn’t turn down. They said we will support you in that and that gives me even more respect for them. At the end of the day, they are always going to be family regardless of if they are Toyota, Chevy and Ford. They are always going to be family to me all of those individuals.”