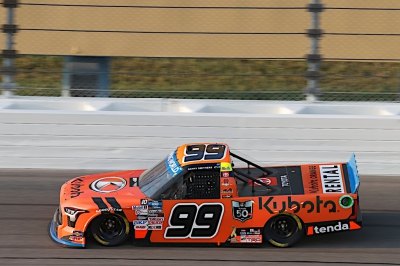 Ben Rhodes is superstitious about being in the same room as the NASCAR Camping World Truck Series trophy.

The Kentuckian has an Old Fashioned named after him in The Barn at Phoenix Raceway.

Rhodes mentioned both Seneca and Pythagoras in his Championship 4 Media Day interview at the Phoenix Convention Center.

And—oh, yes—he’s the defending series champion—without much credit in the eyes of handicappers for winning the title last year.

Among the Championship 4 drivers, Rhodes is the clear long shot. First-time qualifier Chandler Smith is the oddsmakers’ favorite, having won the 2021 season finale as Rhodes was wrapping up the championship with a third-place run.

Rhodes doesn’t mind that the bookies aren’t sanguine about his chances. With a sixth-place finish on Oct. 22 at Homestead-Miami Speedway, he made the Championship 4 by one point over Stewart Friesen.

But Rhodes feels the trial by fire might help him—hence, the quote from the Roman philosopher Seneca.

“I believe this is a quote from Seneca, and I’m going to paraphrase a little bit, but ‘The road to greatness is always rough,’” Rhodes said. “It feels like every season in the Playoffs—I can only think of one time that we were able to just kind of coast through to the next round.

“For the most part, it’s fighting tooth-and-nail just to get ourselves into that spot to transfer. Here’s the tiebreaker. Here’s one point. Here’s four points. It’s not easy to do that. It’s very easy to make mistakes in high-pressure situations. So, I think the fact that we had to be forged in fire has already given us a little bit of an advantage.”

Rhodes acknowledges that ThorSport Racing teammate Ty Majeski has momentum on his side, having won two of the last three races. But Rhodes hasn’t lost his hunger for a second championship. Teammate Matt Crafton is the only driver in series history to win back-to-back titles, a feat he accomplished in 2013 and 2014.

“I believe there’s a cup called the Pythagoras Cup,” Rhodes said. “When the Cup gets full, it drains itself back out. That’s kind of what the championship felt like last year. We won it—I’ve never experienced such happiness and true emotion in racing before. It felt like it was so long to get to this point.

“Now I feel like I can’t live without it. My cup’s empty again. I’ve got to fill it.”

Rhodes, who was in his cups for last year’s post-race press conference, promised another memorable celebration if he wins a second title.

“We have Ben Rhodes Old Fashioneds now served at The Barn,” Rhodes said. “I don’t know how they’re concocting them, because I made mine my way. Hopefully, they‘re following that recipe.

“That was the whole story. I went out there last year, and they didn’t have an Old Fashioned. I’m from Kentucky—ain’t no bourbon. So, they’ve got it now. Now I just have to perform—150 laps to make it to The Barn.

“And you’re going to see something epic.”