The Table is Set for Ankrum in South Florida 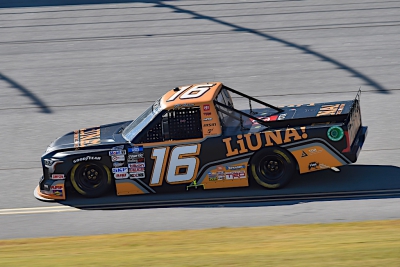 Two to Go … Tyler Ankrum comes to the southern-most stop on the NASCAR Camping World Truck Series schedule at Homestead-Miami Speedway (HMS) for the penultimate round of the 2022 season. The driver of the No. 16 LiUNA! Toyota Tundra TRD Pro has a fond memory of his most recent trip to south Florida as he scored a runner-up finish at HMS in 2020. The result two seasons ago tied his second-best finish in Camping World Trucks competition (behind his first-career win in 2019), a feat he looks to replicate with the experience of the No. 16 team behind him.

The Table is Set … HMS holds a special place in the memories of the No. 16 team. Crew chief Scott Zipadelli and company have won two of the last three events at the abrasive, high-banked 1.5-mile oval, which included a championship winning performance with driver Brett Moffitt in 2018. They followed that up with a dominating effort the following season with driver Austin Hill leading 56 laps en route to a second-straight HMS victory. Ankrum’s runner-up finish in the Camping World Trucks’ most recent trip to HMS has the table set for the No. 16 team to return to their familiar form on Saturday afternoon.

Chassis Selection … Chassis No. 007 returns to action this weekend after its most recent outing at Kansas Speedway in September. This chassis is best known for winning the 2018 championship by capturing the checkered flag at HMS with Moffitt at the controls. This Toyota Tundra TRD Pro also has three wins under its belt at three different intermediate venues.

Tune In … Coverage from South Florida begins on Saturday with NASCAR Raceday at 12:00 p.m. ET on FOX Sports 1 followed by the green flag at 1:00 p.m. ET. Stay connected with the No. 16 LIUNA team by following @Hattori_Racing on Twitter, @hattoriracing on Instagram, and Hattori Racing Enterprises on Facebook.

On racing at Homestead-Miami after a two-year absence:

“Homestead is such a different racetrack than anything else we race on all season. It’s a perfect oval and it’s turned into one of the most abrasive surfaces we race on and puts on really good racing because of that. Scott (Zipadelli) and these guys have always run well at Homestead, and I had a really good finish last time we were there in 2020, so I’m excited to see what we can do with our LIUNA Toyota Tundra TRD Pro this weekend. The pace really falls off during a fuel run and tire management always comes into play. We should have a good baseline in practice and hopefully we can fine tune on it and put ourselves in the right position towards the end on Saturday afternoon.”