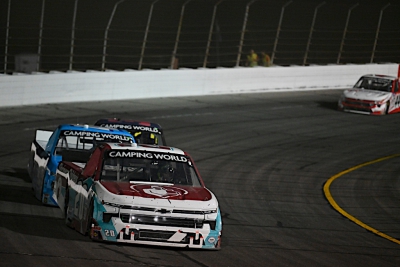 David's Electric has partnered with Jesse Little and Young's Motorsports as the primary partner for the night race at Bristol Motor Speedway, on September 15. Visit Kingsport and Visone RV return as associate partners with Jesse and the No. 02 for the UNOH 200 presented by Ohio Logistics.

David's Electric is excited to partner with Jesse at The Last Great Collesium Thursday night. "As a longtime race fan, being able to partner with Jesse Little and the Youngs Motorsports Team at Bristol Motor Speedway is something we have been looking forward to all season," said David Poerio, owner of David's Electric. “Under the lights at the historic track with the Truck Series and Jesse piloting the Chevy Silverado makes this race the perfect arena for David’s Electric to highlight our company and pursue B2B connections in the KY market. We look forward to supporting Jesse and the team during the 2022 season.” Poerio continued.

"Visone RV is proud to be supporting Jesse Little at Bristol this week, as we have throughout the season,” said Visone RV Parts owner Terry Blankenship. “When Jesse offered us the opportunity to partner with himself David’s Electric, and Visit Kingsport we jumped at the opportunity,” Blankenship continued. "We are excited to introduce Visone RV to the NASCAR Camping World Truck Series as we know they share the same passion for RVs that we have. That passion translates into our relentless effort to acquire quality, hard-to-find motorhome parts and make them available to the public at wholesale or below."

"The Bristol night race is always a special one," Little said. "This Thursday I'll get to run the high banks with my Youngs Motorsports 02 team and some of my most long-standing partners. David's Electric, Visit Kingsport, and Visone RV will be riding on board for the 200 laps. I have always been so thankful to have their support and really look forward to giving all of them and the team of guys the strong run they all deserve."