Nemecheck clinches Kansas and leads the way in playoffs Featured 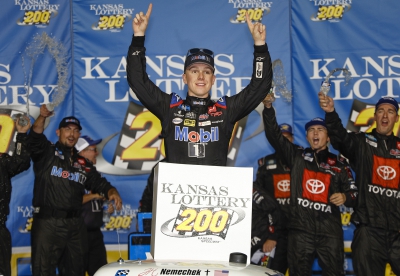 Even though the driver of the No. 4 Toyota Tundra for Kyle Busch Motorsports John Hunter Nemecheck started on pole and led the race high of 88 laps out of the 134, it wasn’t a snoozefest race in the Heartland of America. Not only did he officially lock himself into the Round of 8 Truck Series playoffs, he also tied his father, Joe Nemecheck, with two wins at the Kansas Speedway.

“It’s really cool,” Nemecheck told the media center Friday evening. “He has two of these Kansas trophies in his trophy case, but he doesn’t have a Truck Series one, just Xfinity and Cup wins here. I have a Truck and Xfinity trophy, and maybe I can go out and get me a Cup Series one someday.” John Hunter also states his love for this track. “I really love this racetrack. I feel like it really suits my driving style with it being multiple grooves, slick, tire falloff. I love any racetrack you can go to and rip the fence.”

While it was a great night for the main Toyota truck team, it was a bad night for second place finisher Carson Hocevar, who barely missed the playoffs by three points below the cut line. Matt Crafton also missed the playoffs and won’t compete for a fourth title. Hocevar’s No. 42 truck team for Niece Sports decided to pit early, and ride out 70 plus laps to try to win the race on strategy. Unfortunately for him, it didn’t pan out on the final lap. “I didn't even believe in the call myself,” Hocevar told MRN post race.

”I was shaking my head on pit road. Phil Gould (Hocevar’s Crew Chief) deserved to win the race. I don't know what else I can do differently. There's no regret. There's disappointment. It's like being a bridesmaid at my own wedding."Another name in the game that looked like he would be a contender was Ty Majeski driving the No. 66 for ThorSport Racing, started in second and led 14 laps from lap 7 to lap 20. He would end up finishing eighth in the Kansas Lottery 200.

This upcoming Thursday on September 15th, the tough trucks of NASCAR will take on the famous Bristol Motor Speedway for the UNOH 200 Presented by Ohio Logistics. That race will be 200 laps around the World’s Most Famous Half Mile, and will start at 9 p.m. Eastern on FS1.