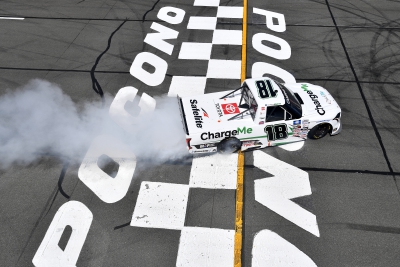 Chandler Smith (No. 18), burning it down in front of the Pocono fans after he won Saturday afternoon. Logan Riely/Getty Images

Chandler Smith secured his playoff spot back at Las Vegas when he won the 20 mile race in  early March, but that didn’t stop him from leading 49 of the 60 laps in Saturday’s CRC Brakleen 150 at Pocono Raceway. Smith came to the final regular season race before the playoffs began to show how dominant his No. 18 team will be.

“God is good.” quoted Smith to the media after his win. “It’s God’s timing. We’ve been going through a bit of a struggle here recently, but just when we need to start shining, we start shining. I can’t thank everyone enough. This ChargeMe Toyota was fast today. It was really good. We were a little tight. Had some trouble getting through the gears. Sorry to the 51 (Corey Heim) team, but also thank you to the 51 team. This win is as much mine as it is yours.” Chandler Smith will now head to Lucas Oil Raceway Park second in the NASCAR Camping World Truck Series standings, 15 points behind Zane Smith

The one hour, 20 minute, and 39 seconds race proved to be a sprint more than a marathon to the truck stars of NASCAR. With five lead changes throughout the 150 mile event, it showed that they needed to get up front fast to be in contention. The race also had five caution flags that contained 20 of the 60 laps under the yellow condition, causing stage one to only have six of the 15 laps run under the green flag.

Derek Kraus, Tyler Ankrum, and Matt Dibenedetto all were just shy of making the playoffs, by staying in 11th, 12th, and 13th in points respectively.  Here are the 10 NASCAR Camping World Truck Series drivers who will battle in the seven race playoffs.

Next week, the super truckers of NASCAR will take on the Lucas Oil Raceway in Indianapolis, Ind., returning to the 0.686 mile track for the first time since 2011. That race will take place at 9 p.m. Eastern on Friday, July 29th. It will be carried live on FS!, MRN, and SiriusXM NASCAR Radio.