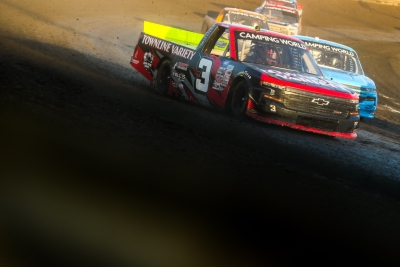 - Practice; After the completion of a 50-minute practice session followed by an abbreviated 25-minute session on Friday night, 23-year-old Canadian Dylan Westbrook making his first laps in a NASCAR Camping World Truck Series (NCWTS) truck would record a fastest lap of 23.926 at 75.232 mph on Lap-37 of his 37-lap session in Practice 1 putting the No. 3 Townline Variety Chevrolet Silverado, 20th fastest of the 38 trucks entered for the Clean Harbors 150 Presented Premier Chevy Dealers. Practice 2 would see the track dry out and slow down and Westbrook would log a fast lap of 24.791 at 72.607 mph on Lap-5 of his 24-lap run ending the second practice in the 29th position overall.

– Starting Position; The starting lineup for Saturday night’s Clean Harbors 150 Presented by Premier Chevy Dealers will be determined by four random draw qualifying Heat Races consisting of 10, 10, 9, 9 trucks for 15-Laps shown at 7 PM ET LIVE on FS1. The driver with the highest finishing points total determined by finishing position in the heat race paired with passing points earned will determined the pole-sitter and starting lineup for the Clean Harbors 150 Presented by Premier Chevy Dealers. Westbrook will line up ninth inside Row 4 in the third qualifying race at the historic Iowa dirt half-mile oval.

– Chassis; JAR will bring Chassis No. 011 to Knoxville Raceway for Westbrook to compete in during the Clean Harbors 150 Presented by Premier Chevy Dealers. This will mark the first dirt race for Chassis No. 011 since being converted from a former short-track truck.