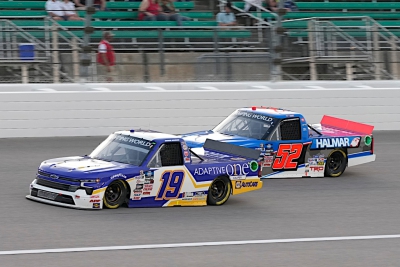 McAnally-Hilgemann Racing drivers Derek Kraus and Colby Howard each had their best race of the season in the Heart of America 200 at Kansas Speedway on Saturday night.

It was an exciting race for MHR, with the two drivers running nose-to-tail at times and Kraus charging into the top five in the final stage of the race. Both drivers benefitted from top 10 finishes in the stages, to gain valuable bonus points.

Indicative of the finish they would have, Kraus had started eighth on the grid and Howard lined up 11th. Kraus was up to sixth by the end of Stage 1; while Howard slipped back to 12th, after initially moving up to ninth. A mishap during the pit stop dropped Kraus to 20th for the restart, with Howard 13th.

Kraus quickly charged back into the top 10 and finished eighth at the end of Stage 2, just ahead of Howard in ninth. While Kraus began working his way to the front in the final stage, Howard slipped back as he battled handling issues. The final caution of the night set up a restart with eight laps remaining and impacted the finish of both MHR drivers.

Kraus, who was fifth on the restart, got shuffled back and was squeezed along the wall in the fierce battle as the laps wound down. He reclaimed one spot to come home eighth. It marked his fourth top-10 finish in five starts at Kansas. Howard took advantage of the late caution to pit for scuffed tires and charged from 16th to 11th, while making his first series start at the speedway.

Kraus gained two spots as he moved up to 12th in the championship standings. Howard, with his third consecutive top-15 finish, also moved up two positions to 17th. MHR looks to continue the momentum, as the Camping World Truck Series heads to Texas next week for the third event in eight consecutive weeks of racing.

Prior to the Kansas race, Kraus and Howard visited shop customers at Chris McGraw NAPA stores in the area. MHR hosted guests from the stores at the track on Saturday – providing them with a VIP Experience that included a tour of the NAPA transporter, a meet-and-greet with the drivers and access to pit lane with the team.

“Our Chevy was solid all night. We just lost some spots on restarts and had to battle back each time. Overall, it was a good night and good momentum.”

“We fired off with a really fast Gates Hydraulics Chevy Silverado. We just did not have any long-run speed and in the second stage the pit crew went the wrong way and hurt us even more. We pitted and put on scuffs for that final restart and we managed to pass a few trucks for a hard fought 11th.”