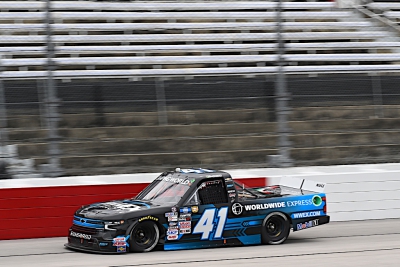 Chastain and the No. 41 Worldwide Express Chevrolet came to life following the team’s first pit stop of the night on lap 20, driving up through the field in the final laps of Stage One to cross the line second. After winning the race off pit road during the stage break, Chastain took control of the race and was out front for a majority of Stage Two before giving way to teammate Carson Hocevar and settling for another second-place showing in the stage.

The No. 41 team won the race off pit road yet again before the start of the final stage before Chastain and John Hunter Nemechek began to battle for the lead following the ensuing restart. After surrendering the lead, Chastain was shuffled back to fifth when two trucks got together and forced the two-time Cup Series winner to check up and lose ground on the leaders. On the final restart – starting in third – Chastain suffered from a transmission failure heading into turn one, ultimately ending his night and resulting in a 25th-place finish.

Chastain led four times for 46 laps on the night – second to race winner Nemechek’s total of 69.

Chastain on his strong run at Darlington: “We had a fast Worldwide Express Chevrolet Silverado tonight. We led laps and were in position to race for a win but, unfortunately, the transmission got stuck in second gear on the final restart. We’re bummed with the end result, but I’m proud of the effort from Niece Motorsports and happy for Carson Hocevar and the No. 42 team. Their day is coming.”