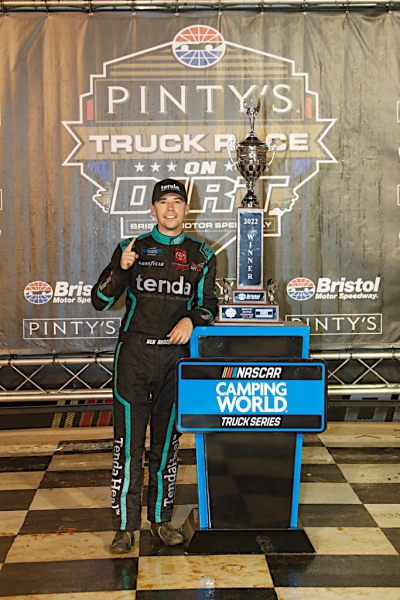 Ben Rhodes earned his first victory of the season by sweeping the stages and making a late-race pass to score the win at the dirt race at Bristol Motor Speedway on Saturday evening.

Did you learn some of what you learned watching the Chili Bowl this year?

“I tried to. I really did. It was a tough race once the track started to slick off. It held moisture in different pockets around the track. It was hard to hunt for the grip, but luckily I had a really good team behind me telling me where to go and where they tried to see it. I just tried to follow their instruction. I had a bad fast Tenda Toyota Tundra.”

What were you thinking as you were driving through the field?

Solid finish. How was the finish from your perspective?

“Solid night for our Mobil 1 Toyota Tundra TRD Pro. We worked really hard over the off season to make the dirt prograam better. I feel like we were successful in doing that. I felt like we had one of the better trucks in practice. We needed the racetrack to dry slick off and it definitely did that – just didn’t quite have enough to get past the 42 (Carson Hocevar) and the 99 (Ben Rhodes) there. They were a little bit better than us. We will go back to work, but solid points day. Solid finish for our No. 4 Toyota Tundra TRD KBM (Kyle Busch Motorsports) team. Looking forward to the next few weeks and just trying to build on the recent finishes that we had after the start of the year.”

Solid top-five for you on the dirt. How was your race?

“We drove through the field pretty well. In the first stage, we got to 11th or 12th, and made an adjustment to help my forward drive and it got me a little bit too much on the tight side for the second and third stages, but I still felt like I could get some speed on a restart or last couple lap run. When we got a couple of those restarts, I got lucky and got in a good position in the outside groove and would pass two at a time. To finish fifth is definitely exciting for the day we probably should have had. Those are the kind of days we have to have more often – maximizing what we can do. Just proud of my 98 TSPORT Tundra guys.”

Great race until the end. Can you talk about the run and the finish?

“I had a lot of fun. I was skeptical coming in. I’ve never run dirt in a race car before, but it was a lot of fun. We had a really, really good truck. I thought we had the truck capable of winning of the race – me and Ben (Rhodes) I thought were the class of the field. When you have race trucks like that capable of winning, you want to take advantage of them and it hurts to get caught up in somebody else’s incident, but that’s part of the game. Overall, had a really fast TSPORT Toyota Tundra TRD Pro and if we keep bringing fast trucks like this our time will come.”

Incredible drive through the field. Can you talk about your debut overall and the late race contact?

“I felt like we had plenty of speed today in our Mobil 1 Tundra. Being my first time in something that heavy – especially on dirt – I felt like we had a strong showing for sure. I think that last stage I felt like we were too free. We were about a third or fourth place truck, but then the guys that pitted – they started coming on like we figured. Eventually (Ben) Rhodes got to me and was trying to slide me and eventually was going to make it work. I don’t know if we made any contact or not, but when he slid in front of me, I thought we touched a little bit in the left front. When I tried to come back down, it got the attitude of the truck kind of jacked up and with kind of already being on the free side it was enough to kind of finish me off. Just kind of a tough deal and very unfortunate, but more or less just a racing deal. I felt like we had plenty of speed and made great adjustments. We made a gamble with the strategy at the stage and it almost worked. Just sucks to end it like that.”