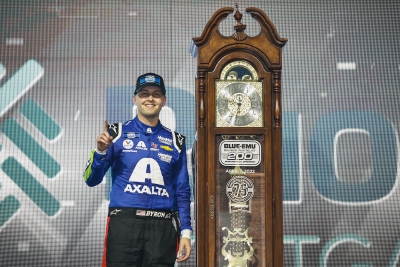 Leading a race-high 94 laps, Byron was able to overcome a 32nd place starting position after qualifying was rained out earlier in the day.

"It was a lot of fun. Great crowd here at Martinsville," Byron said on the FS1 telecast. "I've never won a race at Martinsville -- I struggled here when I was in late models. ...

"Thanks to Spire, all the guys back at their shop. They don't have a lot of guys, but they do it right," he continued.

Zane Smith led all 50 laps in Stage One. Because several drivers stayed out after the conclusion of the first stage, Smith -- who pitted -- had to work his way back up to fourth by the conclusion of Stage Two.

After all of that hard work he was met with a speeding penalty on pit road during the second stage break, and ultimately battled back to finish ninth.

Defending series champion Ben Rhodes won Stage Two and led 47 laps with arguably the best long-run truck on the night. Several late cautions, however, negated his truck's strength, and he settled for a fifth place finish.

Johnny Sauter -- who got tangled up with Hailie Deegan earlier in the evening -- came through the field from a 36th place starting spot to finish second. It was his first Truck start since Daytona in February; Deegan finished 19th.

Running near the front of the field on Lap 133, Stewart Friesen was spun by Christian Eckes after Rhodes pushed him up the track; Friesen wound up 13th, one spot behind Eckes.

Also in the top-five were Kyle Busch in third and John Hunter Nemechek in fourth, who earned his second consecutive top-five finish.

In all, there were 11 cautions for 71 laps and the margin of victory for Byron was 1.138 seconds.

The NASCAR Camping World Truck Series returns to action next Saturday on the dirt at Bristol Motor Speedway. Coverage begins at 8 p.m. ET on FS1.