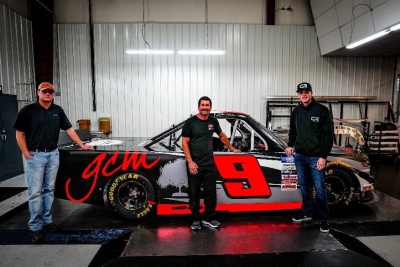 CR7 Motorsports, owned by Codie Rohrbaugh, announced today that the team will field the No. 9 Chevrolet Silverado in the NASCAR Camping World Truck Series (NCWTS) with driver Blaine Perkins.

“This is pretty special,” Perkins said. “This is my first full- time season in any of NASCAR’s top-tier series. I am looking forward to getting into the Chevrolet Silverado this year at CR7 Motorsports. We are going to have a good year.”

He enters his second season of NASCAR's three top- tier series. Perkins made his NASCAR debut on March 13, 2021 at the Phoenix (Ariz.) Raceway. In 2021, the Bakersfield, Calif., -native competed in eight NASCAR Xfinity Series (NXS) events with Our Motorsports.

“I am always looking forward to the short tracks,” Perkins said. “That is where I grew-up racing – at the half-mile and quarter-mile tracks. Martinsville (Va.) Speedway and Bristol (Tenn.) Motor Speedway will be fun. And road racing, I love road racing as well.

“The NASCAR Camping World Truck Series has a very diverse group of tracks. Even the dirt tracks – I have never driven a stock car on dirt, so I will definitely be working on that a lot. But I know we are going to be fast when it comes to racing there. It is really going to be fun to run all these different types of tracks.”

“I have high expectations for the upcoming season,” Rohrbaugh said. “Grant (Enfinger) provided CR7 Motorsports a very solid foundation that we can continue to build from. Blaine (Perkins) will have to learn how the Chevrolet Silverados drive compared to the NASCAR Xfinity Series cars. He will have all the tools around him to be successful – a good crew chief, GMS Racing support, and good Chevrolet Silverados. I really look forward to next season, and, hopefully, making a Playoff- run.”

Rohrbaugh spent four years as a driver in the NASCAR Camping World Truck Series. The Petersburg, W.Va., -native has 36 starts in the series, including two top-five finishes and five top-10 finishes. In addition, he is a veteran of the ARCA Menards Series, ARCA Menards Series East and CARS Solid Rock Carriers Tour.

“I think it is a big opportunity for CR7 Motorsports,” Rohrbaugh said. “It gives the crew, and Blaine the opportunity to learn and work together, and get that much better every weekend.”

Doug George, who joined the organization in 2019, is the crew chief of the No. 9 Chevrolet Silverado for Perkins. As a NASCAR Camping World Truck Series 18-year veteran crew chief, George is credited with two victories (2009, Kyle Busch), 35 top-five finishes, 79 top-ten finishes, and five pole awards.

Perkins also has a special connection to the Hornaday family. Candice Hornaday and Ron Hornaday, Jr. have both provided valuable guidance and support to him during his racing career.

"This year is about learning from one of the best truck drivers of all time, Ron Hornaday Jr.,” Perkins said. “Having Ron in my corner coaching me through my first year in the truck series is invaluable. I mean, who gets to say they have a Hall of Fame driver advise them? I’m so humbled by these opportunities.”

CR7 Motorsports will enter its fifth NASCAR Camping World Truck Series season with an integrated competition and engineering partnership with the championship-winning team GMS Racing. The agreement with GMS Racing will allow CR7 Motorsports to purchase chassis components and other services developed over their years of championship-caliber competition. As is the case with many other alliances within NASCAR, technical collaboration and communication amongst the teams will be encouraged to help improve performance. Perkins will have access to the latest Chevrolet technology with simulation support.

“I have never driven in the NASCAR Camping World Truck Series before, so that will be my biggest challenge. Fortunately, we will have practice and qualifying next year, so that will be beneficial,” the first-generation driver said.

“We also have huge experience behind the scenes with CR7 Motorsports in Doug and his team. Between my team, the Hornaday’s, my spotter, Tim Fedewa, and the CR7 Motorsports’ team, our goal is to be a contender this year for a championship. We have huge goals to meet this season, but we have the right team to get it done.”

The NextEra Energy 250 at the Daytona International Speedway will be broadcast live on FS1 on Friday, February 18 at 7:30 p.m. (ET). It will also broadcast live on the Motor Racing Network (MRN) and SiriusXM NASCAR Radio.