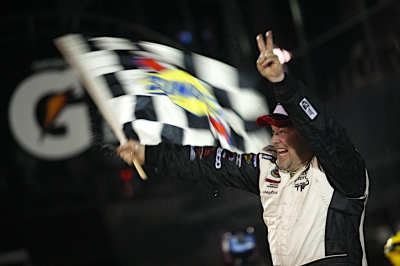 NASCAR Camping World Truck Series. Todd Bodine currently has 794 career NASCAR starts. With the addition of these six races, Bodine will become the 28th driver in NASCAR history to achieve 800 career starts. Camping World has signed on as the primary sponsor for the six events.

Bodine said, “We started talking about the possibility of doing something like this with Marcus Lemonis (CEO and Chairman of Camping World) around this time last year. When Marcus tweeted back in October that he needed 800 reasons from the fans to make this happen, the fans responded back with thousands of reasons! We are excited for the opportunity to reach the 800-start mark with top equipment from the team at HFR. It’s also great to be back with Toyota. We have 23 wins and 2 Championships with Toyota, so I’m proud to achieve this milestone in a Tundra. I have already heard from several Camping World Truck Series drivers, who have never raced against me in the past, they sound as excited to race me as I am to come out of the Fox Sports Studio for these six races and race them!”

HFR Team Owner Chris Larsen said, “It’s the kiss of death in the Camping World Truck Series when Todd picks Stewart (Friesen) to win on TV. So, we’re excited to get him out of the studio and into our HFR Tundras for his run to 800 career starts.”